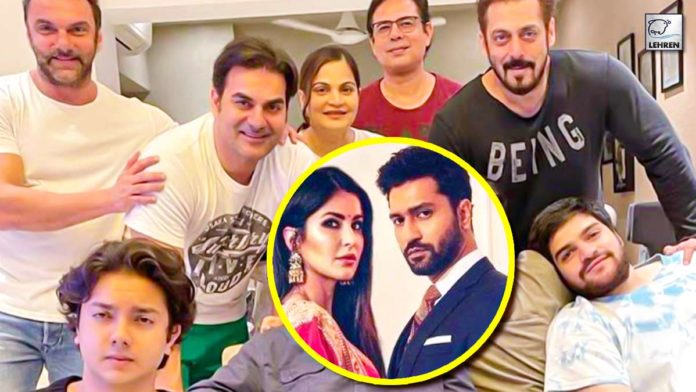 As per tabloids, Salman and his family will most likely attend the royal wedding, as the former has received an invitation from the couple.

Another update about the couple that has taken the internet by storm for the past couple of weeks. What’s new this time? Well after much contemplation, CO star and close friend Salman Khan is all set to make his ‘Dabangg’ entry to Katrina-Vicky’s dreamy wedding. Sources close to the Dabangg actor have revealed how the entire family is expected to attend the wedding taking place in Jaipur.

“Katrina is very close to Salman’s sisters. Both his sisters are expected to attend with their husbands. I think Katrina is also keen on Salman’s parents and Helen Aunty attending the wedding. But considering their age and health they may not be able to make it,” says the source.

Katrina, who shares a close bond with the Khan’s family and recently shared in her interview,

“Especially his sisters. Over the years that we have been together, I think I was really fortunate that I always… His family kind of did become my family. We developed very real and strong bond. So Alvira and Arpita are like my sisters. That I think is always going to be there. It is a very deep bond that we have,” said Katrina.

What makes Salman’s visit to the wedding a topic of discussion is his past relationship with the actress.

Although not confirmed, Salman and Katrina were rumored not just dating, but Salman had reportedly proposed to Katrina on the sets of “Maine Pyaar Kyun Kiya”. The Rache star had also organized a star-studded birthday party when Katrina had turned 24, the same party where Salman was rumored to have gotten down on one knee for the actress.

The birthday bash was full of B-town stars including Shah Rukh Khan, Aamir Khan, Ranbir Kapoor, Deepika Padukone, as well as Katrina’s mother and sister. With the DJ playing “Mujhse Shaadi Karogi”, Salman had proposed to Katrina in front of everyone. A source adds about Katrina’s clueless expression, “She didn’t know how to react with Salman’s gesture.”

Things have been pretty cordial ever since, the two didn’t let their personal rapport affect their professional stance. As sources reveal about Bhaijaan’s entry to the wedding, meanwhile it would be worthwhile to wait as more details about the wedding unfold.

Katrina Kaif and Vicky Kaushal are reportedly tying the knot in a luxury resort in Sawai Madhopur in Rajasthan on December 9. The couple, along with their families, flew to Jaipur on Monday evening. Pre-wedding festivities will begin from December 7 onwards.