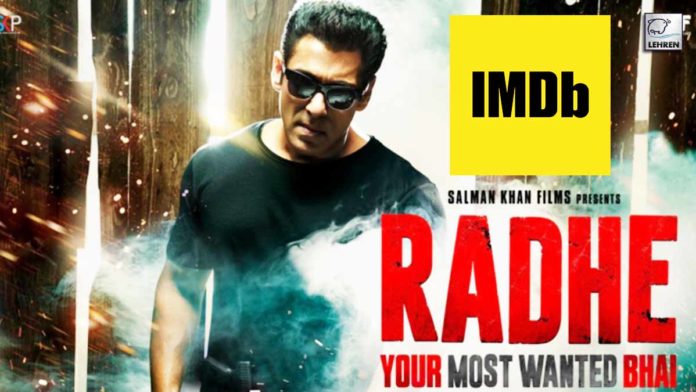 Check the IMDb rating of Salman Khan's latest movie Radhe: Your Most Wanted Bhai that is currently streaming on Zee5.

After waiting for a long time, Salman Khan’s film Radhe: Your Most Wanted Bhai finally released on May 13 this year. The action drama film directed by Prabhu Dev stars Salman Khan, Disha Patani, Jackie Shroff and Randeep Hooda. Fans were very excited for the film’s release at it was already delayed by an year.

Initially slated for May 2020 release, the film was pushed for an year due to Covid-19 pandemic. As the pandemic doesn’t seem to end anytime soon, Salman had to let go off the idea of theatrical release and therefore released it digitally on Zee5.

Radhe created history by becoming the most-watched film on Day 1 with 4.2 million views across platforms. However, Radhe’s IMDb rating will shock you.

So far, about 45,000 people have rated the film on IMDB. And the average rating of Radhe is 2 out of 10. This makes Radhe Salman Khan’s second-lowest rated film on IMDb.