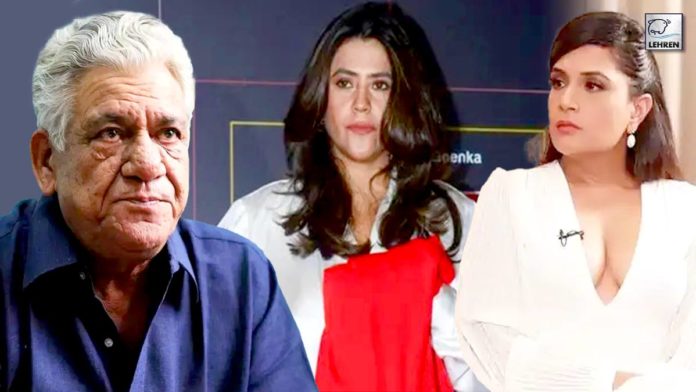 From Richa Chadha to Ekta Kapoor, check out the list of Bollywood celebs who disrespected the Indian Army.

India is a democratic country where every citizen enjoys their freedom to speech. One is free to question and criticize the ruling government, current policies and anything to everything happening in and around the nation. However, one has to be sensitive enough to draw a line between between criticism and hate speeches. In our nation, people worship God and the Indian Army. Our soldiers leave their family and comfort behind to protect the nation, to protect us. The least we can offer is some respect. However, some Bollywood celebs find it hard to do the same. There have been several instances when these celebs made some highly insensitive remarks and gestures to insult the Indian Army and thus ended up hurting our soldiers, their families and the ones who hold highest regards for them.

Richa Chadha is currently facing backlash for an insensitive tweet against the Indian Army. It all began when Indian Army’s Northern Command’s commander-in-chief made a statement that they are ready to retake Pakistan-occupied Kashmir if the government issues such an order. Reacting to this piece of news, Richa Chadha tweeted, “Galwan says hi”.

Actress Swara Bhaskar who comes from leftist school of thoughts often gets trolled on social media. However, this time, the actress is getting criticized for supporting Richa Chadha. When Richa Chadha’s tweet on Galwan went viral, Swara tweeted, “@RichaChadha strength and love to you!”

Bashing the two actresses, a user wrote, “Why do you need a China or Pakistan when you have a Richa and Swara.”

Also Read: TV Stars Honours The Sacrifice Of The Indian Army At The Galwan Valley

Years ago, actor Om Puri made the headlines for a similar reason. He insulted the Indian Army after the deadly Uri attacks in 2016. When government banned Pakistani artists after the Uri attack, Om Puri criticized the government’s move. He went on to disrespect the martyrdom of our soldiers as he said, “Did we force them to join the army?”

After receiving backlash, he apologized and said, “I am very embarrassed at what I said and I deserve punishment, not forgiveness. I first apologise to his (a Uri attack martyr) family, if at all they will forgive me, I apologise to the whole country, the army.”

Ekta Kapoor has not only received online criticism but also legal notices for disrespecting the Indian Army in her web series. Ekta Kapoor’s show XXX:Uncencored had reportedly hurt the sentiments of the armed forces and their families. The show had a scene where an army officer’s wife insulted his uniform by making her lover wear it in his absence and then tearing it off during an intimate moment. After numerous FIRs, Ekta Kapoor had to delete this scene.

Bollywood’s Mr. Perfectionist was criticized for his not-so-perfect depiction of Indian Army in his latest film Laal Singh Chaddha. In the film, Aamir’s character, who is depicted as a mentally-challenged person, was portrayed as a decorated army officer who even fights the Kargil War.

Former England cricketer Monty Panesar also condemned Laal Singh Chaddha as he took to Twitter to talk about the film. Monty said, “Forrest Gump fits in the US Army because the US was recruiting low IQ men to meet requirements for the Vietnam War. This movie is total disgrace to India Armed Forces Indian Army and Sikhs !!Disrespectful. Disgraceful.”

Check Out: 5 Bollywood Actors Who Wanted To Join Indian Army