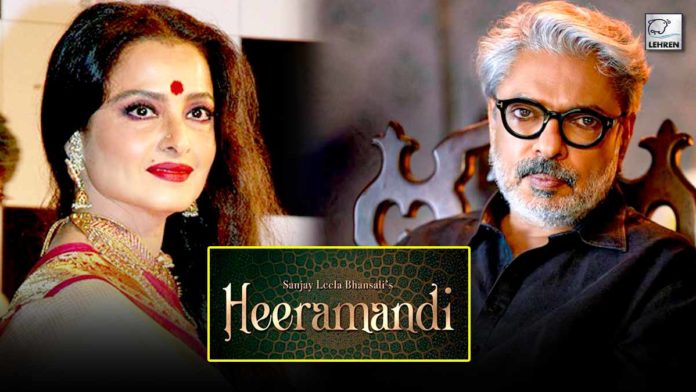 Rekha is reported to return to acting with Sanjay Leela Bhansali’s Heeramandi.

Sanjay Leela Bhansali’s Netflix project ‘Heeramandi’ has been making a lot of headlines ever since it was announced. This will mark the ace director’s debut on OTT and also his first collaboration with streaming giants Netflix. In a recent development, it has been reported that veteran actor Rekha is in advance talks for Heeramandi. She will be joining the ensemble cast, Manisha Koirala, Sonakshi Sinha, Richa Chadha, and Huma Qureshi have already been signed in for pivotal roles.

After ‘Gangubai Kathiawadi’, Heeramandi is the much-anticipated project from Bhansali. It is a Netflix original series based on the lives of courtesans in pre-independence India. It will narrate the journey of three generations of courtesans in Lahore’s red-light area before the partitions.

From a reliable source, we have been knowledgeable that Rekha is reported to be part of the Netflix series. She has been away from the limelight for quite a long time. Her last movie was Inder Kumar’s ‘Supernani’ in 2014 which also featured Sharman Joshi, Anupam Kher, and Randhir Kapoor in key roles. The graceful actor is now said to make a comeback with a bang on the OTT platform.

According to a source close to Bollywood Hungama: “Rekha has been keen to work with Bhansali for the longest time and he too is desirous of tapping into ‘the Rekha mystique’. But somehow, the two have never been able to work together before. Bhansali wanted Rekha for a special role in Heeramandi from the beginning. But then, it seemed that this classic partnership was again jinxed.”

More about Heeramandi it is exclusively created by Hum Dil De Chuke Sanam director for the online streaming giant, Netflix. This will be seven episodes show of one hour each, so far this is the only season talked about and no series of seasons has been announced. Earlier, Bhansali said, “It is a huge saga about the courtesans of Lahore, it is something I was living with for 14 years. It’s very vast and ambitious.”