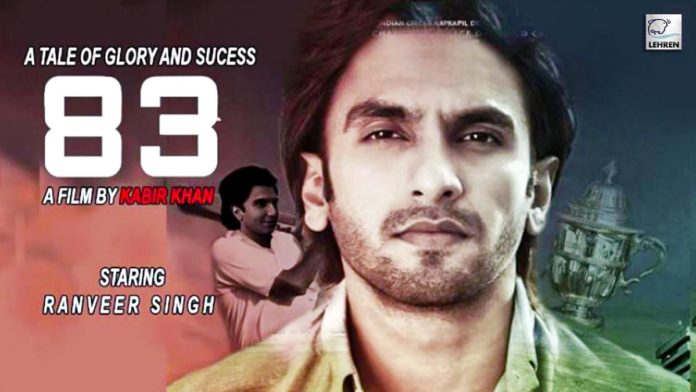 Fans approve Ranveer Singh is 'MAGIC' after watching his performance in the highly anticipated trailer of '83', a story of India's incredible World Cup victory that changed the face of Indian cricket forever.

The trailer for 83 is finally out. Starring Ranveer Singh and Deepika Padukone, the film archives India’s win at the 1983 Cricket World Cup tournament. In the 3 minutes long video, fans couldn’t help but feel completely nostalgic, re-sensing the entire magical journey, when India had won a historic win at Lords, a win that had changed the face of Indian Cricket forever. A win that had triggered India’s obsession with cricket. Ranveer Singh, who plays the character of the Indian Cricket team’s Captain Kapil Dev, who had led the Indian team to victory, has yet another time managed to awe audiences with his brilliant acting skills and exceptional screen presence.

Ranveer Singh shared the video on his Instagram handle and wrote, “The incredible true story of the underdogs who pulled off the unthinkable! #83 Trailer in Hindi Out Now! 83 RELEASING IN CINEMAS ON 24TH DEC, 2021, in Hindi, Tamil, Telegu, Kannada, and Malayalam: Also in 3D. #Thisis83(sic)”.
Kapil Dev too took to his Instagram and Twitter handles to drop the trailer. “This is my team” captioned the cricketer.

The film, which was initially slated for release on 4 June 2021 had been postponed indefinitely owing to the rise in COVID 19 cases. Previously there were also several reports that claimed about a big OTT platform offering Rs 143 crore to the makers of the film, however Shibashish Sarkar, CEO of Reliance Entertainment Group had clarified on his part, “There’s no truth in this. As producers and even the director, we are all on the same page that we want to wait for theatrical release for the next few months. We will first complete the film then we will wait. If six or nine months down the line the situation becomes much worse we will take a call at that time. There is no hurry.”