Ranveer Singh Takes A Dig At The ‘Ajay-Kiccha’ Controversy; Here’s What He thinks! 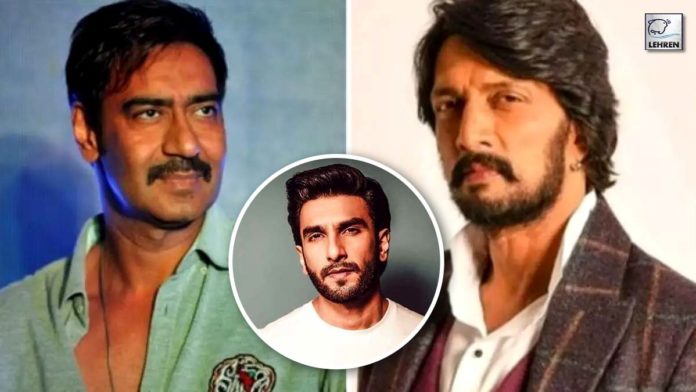 In a recent promotional event, Ranveer shared his thoughts on the recent 'Ajay Devgn-Sudeep Kiccha' controversy. Read to know more!

Ranveer Singh might be caught up with a lot of things lately, with two of his movies lined up for release, one this week (Jayeshbhai Jordaar) and Rohit Shetty’s Cirkus in July. Apart from promoting his upcoming films, the ‘Bajirao’ star is also currently shooting for his sophomore edition with Alia Bhatt, for ‘Rocky aur Rani ki prem Kahaani’. Recently when the actor was seen promoting Jayeshbhai Jordaar, Ranveer was seen sharing his opinion on the same topic, which had become a hot topic of discussion a few days back.

For the unversed, South star Sudeep Kiccha got into hot waters with Ajay Devgn, after the two got into an exchange of words on Twitter, following Kiccha’s remarks that didn’t consider ‘Hindi’ to be the national language of India anymore. This didn’t go down well with Ajay, who decided to school him and tweeted him back. Although Sudeep cleared the air around the singer sanding and stated how he didn’t mean to sound condescending and that his words were mistaken, out of context, many celebrities since then have been sharing their opinion on the same topic.

Following the trend, the same question was presented to Ranveer Singh as well, who chose to answer with utmost honesty. “Music touches me. it does something to me. Why is that considered to be regional cinema? Even Hindi cinema is a region.” he said. He also praised the makers of many South movies, like that of Pushpa and KGF, and congratulated them for the massive success of the films. “Technical aspects of these films are impressive. Logic works both ways. Tomorrow there will be a Hindi movie that will do those kinds of numbers. It’s really about the story. Cinema, sport, and music have the power to transcend these boundaries.” he said.

Ranveer also expressed his desire to work for films other than Hindi. He said, “I can’t speak in Tamil, Telugu or Malayalam, but I would love to. DP is doing Nag Ashwin’s film with Prabhas and it’s so exciting. I’ve always seen it as Indian cinema. I’m very proud of our diversity.”

He further shared how he often discusses the names of his future baby, and the list of names he has already shortlisted. “Ya I think about names all the time. I don’t know what it is, I think it’s because I have a copyrighter in me still somewhere lurking. I have an obsession for names. I am fascinated by unique names.”

He continued, “Every name phonetically has a different quality. Some are very powerful names, some are cute names, some are short names. I have a whole list of boy names and girl names and I am very secretive about it because I don’t want people to steal them. So yes! I do have a list and I am playing that card very close to me. I am not telling anybody. I don’t want them to get common. But I am discussing with Deepika constantly.”