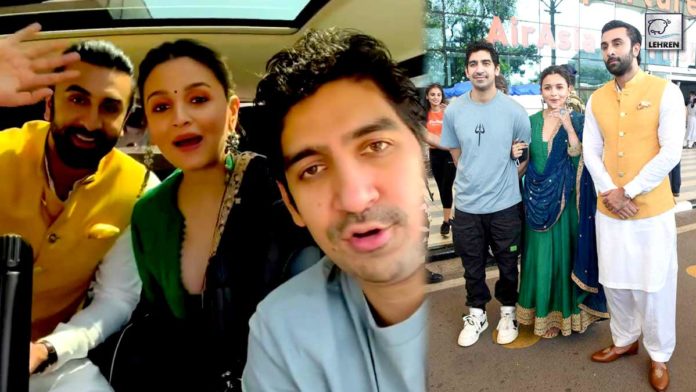 Brahmastra is finally near its release scheduled on 9th September 2022. Brahmastra is a trilogy showcasing Hindu mythological Indian Ancient Astras. Ahead of the release makers have created hype starting a countdown from 10 days. Now when the film is just 3 days far from seeing the lights of the day, the lead cast and the director have announced special news for Brahmastra fans.

Alia Bhatt, Ranbir Kapoor, and Ayan Mukerji watched the film for the first time along with their crew members. They watched their personal screening at a Mumbai theater. Before that, the trio shot a quick video to announce special news. In the video, Alia Bhatt revealed that they are watching the film for the first time whereas Ranbir and Ayan informed that they are holding a special screening for fans on the 8th. This means right one day before the theatrical release the film will be screened especially for fans on 8th September.

They chose this date specifically as 8 is Ranbir’s lucky number. The Darlings actor took to her Instagram account to share the interesting news. Sharing the video, Alia captained it, “Attention! Attention!!!! 3 days to gooooooooooooo.” The video opens with Brahmastra on the big screen turning the camera towards Alia, Ranbir, and director Ayan sitting in a theatre with their 3D glasses on along with their crew members.

Ayan further continued informing the audience, “This is a huge moment for us to be seeing this film finally complete in this form. As we were all together, we decided that one day, before the release, the way we wanted to put the film out in the world is to really watch it with the audiences that the film was made for.” Ranbir Kapoor then mentioned that they have decided to host a special screening of Brahmastra a day prior to its release in Mumbai on September 8 since it is his lucky number.

Over 1 lakh tickets have been sold for the opening weekend in the Advance Booking. The Astraverse is expected to break the dry spell of the Hindi film industry. Making a massive business already Ayan Mukerji’s directorial will be a magnum opus VFX wonder in the Indian cinema. Backed by Karan Johar’s Dharma Productions part one of the trilogy will release on September 9.

Also Read: Brahmastra: Part One Shiva Characters Details Revealed Ahead Of The Release