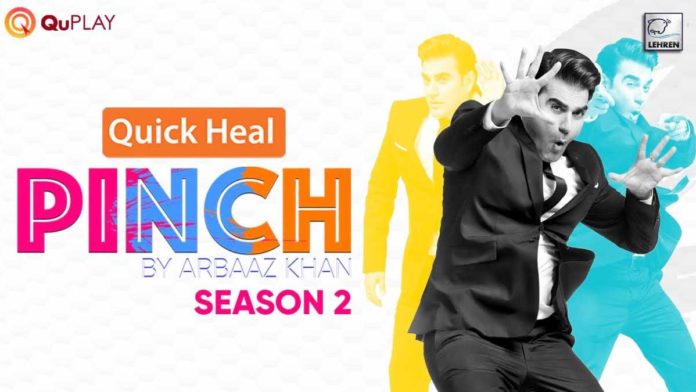 QuPlay which is known for its edgy and new-age content is back with a bang with their Bollywood Big Ticket talk show ‘Pinch’ and its brand new season 2. In 2019, actor-director-producer Arbaaz Khan surprised everyone by donning the hat of a host for QuPlay’s ‘QuickHeal Pinch by Arbaaz Khan’, which deals with celebrities opening up about trolls, cyber-bullying, and what pinches them about social media. The first season saw a plethora of stars who were taken through the hate and mean comments they received in the digital world, and they confronted them with wit and bravery. From Kareena Kapoor Khan to Varun Dhawan, Sunny Leone, Saif Ali Khan, Nawazuddin Siddiqui, Sonakshi Sinha, Kapil Sharma & Karan Johar; they all faced the heat of the virtual world and through Pinch, they gave a befitting reply to the online trolls of the world.

Now, after receiving a tremendous response for season 1, QuPlay is back with the show’s second season. It’s bigger, bolder, and more brutally honest than before. Just like the last season, this time to celebrities will be made to face the social media heat and give befitting replies to the digital world trolling, however, this time the show takes it to a whole new level of quirk. When it comes to guests, this season will be graced by the presence of Megastar Salman Khan marking his OTT talk show debut, Tiger Shroff, Ananya Pandey, Rajkummar Rao, Farah Khan, Farhan Akhtar, Anil Kapoor, Ayushmann Khurrana, Kiara Advani, and others. Well, we’re keeping some names as a surprise for you, so watch out for some surprise packages! This will be the first time we will witness the Khan Brothers as the Host and guest, so expect the sparks and never heard before stories.

QuPlay’s ‘QuickHeal Pinch by Arbaaz Khan’ season 1 took the internet by storm by gaining 185million views from YouTube, Facebook, Instagram, and TikTok. On YouTube, the watch time of the show is of 11,05,07,413 minutes. The overall impression of the first season is around 622 Million across all social media and streaming platforms.

Host Arbaaz Khan talks about ‘QuickHeal Pinch by Arbaaz Khan’ season 2 and getting back to the Hosting Seat by asserting,

“The love people have shown for season 1 was overwhelming. While the essence of the show remains the same, Season 2 shall witness different superstars with different points of view. It’s been such a wholesome experience in totality, delving into such interesting aspects of an actor’s personal and professional life. Season 2 is indeed bigger and bolder and we have new things to add in this season for sure. Can’t wait for the audience to check out this one”.

Show’s creator and QuPlay head honcho Sumit Dutt expressed his views about the second season of Pinch by adding,

“Pinch is so much more than just an entertainment chat show. The goal is to create awareness through superstars based on their personal experiences in cyberspace and I’m more than glad that our guests were so transparent while sharing their respective experiences on Season one which garnered rave reviews. Season two has double the transparency and quirkiness and I’m sure everyone’s going to love this.”

Presented by QuickHeal, Pinch by Arbaaz Khan season 2 is all set to entertain and enlighten you from 21st July on the QuPlay YouTube channel.