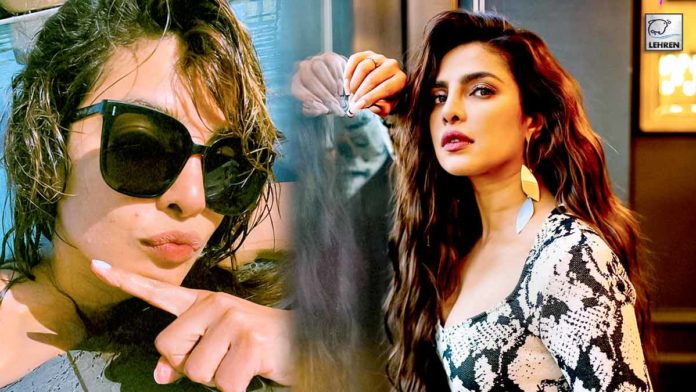 Bollywood actress Priyanka Chopra set the temperature high with her ‘Pool Day’ videos and stills. The actress shared a glimpse of herself enjoying the sun in the pool from her house in California.

Sharing the post, the actress wrote, “When u get a few unexpected hours of self-care..
Sound ON!! Can u recognize the songs I’m listening to? Share in the comments.”

In the videos shared, the actress was seen wearing a black bikini and enjoying some retro music. A hit Aamir Khan song is also featured in the playlist.

The actress first shared a selfie from the pool, in which she was seen wearing a pair of sunglasses. She followed it up with a video in which she was seen grooving to the title track of Dil Hai Ki Manta Nahin. She then shared a video in which she seemed to be vibing to Gulabi Ankhein. Fans took to the comments section to show their appreciation for the actor. One fan commented, “So gorgeous.” Another wrote, “This woman just doesn’t age. Skin is glowing. Pure perfection.” Other fans and celebs even took up Priyanka’s challenge and tried to guess the songs. Comedian Mushtaq Sheikh commented, “Hahahaha the playlist forever groovy!” A fan wrote, “These are all my favourite songs.”
ALSO READ: Priyanka Chopra Would’ve Had An Adopted Baby Sister, Here’s How!

The actress recently welcomed her daughter and announced her name officially as Malti Marie Chopra Jonas. On the work front, the actress was last seen in the sci-fi blockbuster The Matrix Resurrections. She currently has a number of projects in the pipeline, including the Hollywood rom-com It’s All Coming Back to Me, the Amazon Prime Video web series Citadel, and the Hindi film Jee Le Zaraa.
ALSO READ: Irrfan Khan Death Anniversary: A Look At His Best Performances, Awards & Achievements