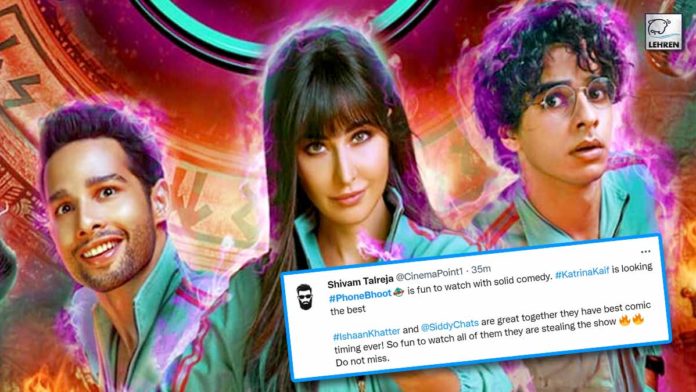 Netizens have turned in their reviews and reactions for Katrina Kaif's horror comedy film Phone Bhoot, here's all that they have to say-

Phone Bhoot Twitter Review: Gurmmeet Singh’s much anticipated directorial Phone Bhoot starring Katrina Kaif, Siddhant Chaturvedi and Ishaan Khatter is now finally out in the theatres. The horror comedy was released alongside Janhvi Kapoor starrer Mili and Huma Qureshi and Sonakshi Sinha starrer Double XL. Hours after the release the netizens have now turned in their first reviews and reactions on Phone Bhoot, here’s all that they have to say-

Meanwhile, the early watchers have now turned in their reviews and reactions to the film on Twitter. And the early reviews suggest that the Katrina Kaif starrer has now opened up to positive reviews from the audience. The trio of Katrina along with Siddhant and Ishaan is receiving appreciation from the audience.

Commenting on the same a user tweeted, “#PhoneBhoot is fun to watch with solid comedy. #KatrinaKaif is looking the best #IshaanKhatter [email protected] are great together they have best comic timing ever! So fun to watch all of them they are stealing the show. Do not miss.”

Praising the trio in the first half a user wrote, “#PhoneBhoot 1st half: Absolutely enjoying the hysterical duo of #IshaanKhattar and #SidhantChaturvedi that infuse so much energy in a script that is intentionally absurd and self aware! The pop culture references are so well integrated #KatrinaKaif with the Slice Ad had me”