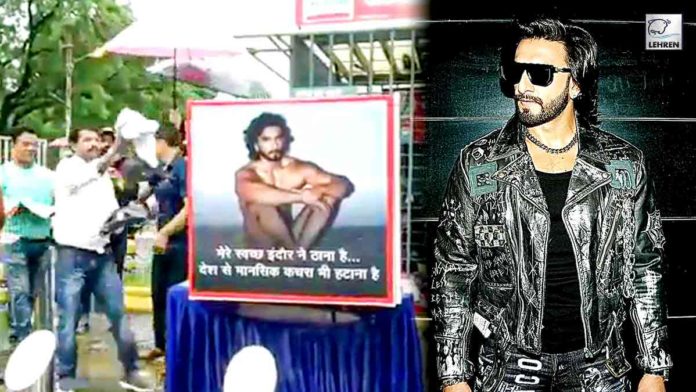 Ranveer Singh's n*de photoshoot has created quite some buzz among the audience, as now people have started donating clothes to the actor as a part of a drive. Watch the viral video.

Bollywood actor Ranveer Singh has created quite some buzz on the internet with his much famous n*de photoshoot, apparently, the actor has also been booked by an NGO for his photoshoot. Meanwhile, recently an NGO in Madhya Pradesh was seen donating clothes to the actor after his controversial photoshoot. Watch video-

For the uninitiated, actor Ranveer Singh created waves on the internet on 21 July after he shared his n*de pictures from a recent photoshoot for a magazine. Soon after which the actor got booked for sharing his n*de pictures from the photoshoot. As per ANI, the complaint application was submitted at the Chembur police station by a Non-Governmental Organisation (NGO) based in the east Mumbai suburb. The complainant stated the actor has hurt the sentiments of women and insulted their modesty through his photographs. A source revealed to ANI, “We received an application from a person associated with an NGO on Monday. No FIR is registered so far. We are enquiring,”.

Meanwhile, now a video has been making rounds on social media where a group of people can be seen donating clothes to the actor. As per the reports, locals from cities like Madhya Pradesh and Indore have donated clothes to the actor. In the viral video, people could be seen gathering around a box as they donated clothes for the actor by collecting them in a box that is covered with Ranveer’s n*de photos from his photoshoot.

Apart from the locals, political parties have also raised their voice on the issue as a few workers from a party have also sent clothes for the actor as a part of an initiative called Neki ki Diwar, the members called out Ranveer’s photoshoot as an ‘act against Indian culture’. Meanwhile, in Indore, many were also seen protesting against Ranveer with slogans.

However, many celebrities from the industry did came in support of the actor. The Kashmir Files director Vivek Agnihotri recently called the FIR ‘stupid’ he further questioned when there are so many nude pictures of women, doesn’t that hurt the sentiments of men. Apart from him actress Alia Bhatt also extended support to the actor and said, “I don’t like anything negative said about my favorite Ranveer Singh. Toh main yeh question ko bardash bhi nahi kar sakti hu (so the question itself is something I can’t tolerate).”