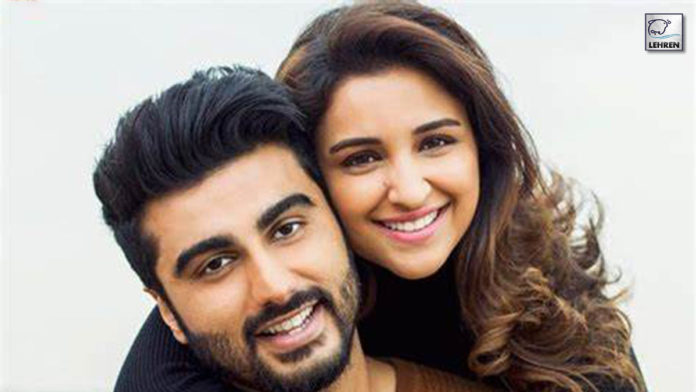 Parineeti Chopra and Arjun Kapoor have worked together in multiple movies together. The latter started his filmy career starring opposite Hasee Toh Phasee actress. Both shared the screen for the first time in Arjun’s debut film Ishaqzaade. Pari referred to him as ‘sach ka asli dost’ when he shared first look poster of her upcoming film Uunchai.

Arjun Kapoor unveiled the character poster of Parineeti Chopra from the mega star cast film. The actress was not surprised but shocked to see this gesture from his co-star. The 33 years old actress revealed she always believed they will become friends one day. Referring to the actor as Baba Pari mentioned that she will cherish this forever.

Arjun wrote, “She was my first co-star, she was my first heroine and this is her first #Rajshri film. This is to all the beautiful firsts. This one is for you Pari! With all heart, I bring to you, my dear friend Parineeti as Shraddha Gupta from #Uunchai! A special film by Sooraj Barjatya. See you at the movies on 11.11.22 Love and luck to Team Uunchai!”

Overwhelmed Parineeti Chopra added the post to her story and wrote, “Ok one second this is not a surprise, this is a SHOCK! (Baba main jaanti thi, ki ekdin din hum zaroor dost banenge)” In the same story, she further added, “My Uunchai look being launched by my original sach ka, asli dost @arjunkapoor”

Elated Parineeti Chopra uploaded one more story on Instagram to thank Arjun Kapoor. She wrote, “Arjun launching my first look from Uunchai is one of those ‘moments’ in our friendship and in our life. In this insecure world, people don’t do that. This is a core memory that I will cherish forever. Sometimes in this crazy career, a gesture like this can make you smile, really smile from within. Love you baba. You are the best. Baaki sab phone pe (rest everything over call).”

The duo has worked together for the first time in the romantic drama Ishaqzaade which marks the debut Bollywood movie of Arjun Kapoor. Later they collaborated for Namaste England in 2018. Their last and most recent reunion was for Sandeep Aur Pinky Faraar released in 2021.

Meanwhile, Parineeti Chopra is receiving good responses for her role in the latest film Code Name Tiranga despite the film performing poorly at the box office. Code Name Tiranga is her first full-fledged action-pack film. She is also gearing up for Uunchai starring Amitabh Bachchan, Boman Irani, and Anupam Kher among others. Rajshri Films Uunchai will release in theaters on 11th November 2022.

On the work front, Arjun Kapoor has Kuttey and The Ladykiller in the pipeline. In Aasman Bhardwaj’s Kuttey he is starred alongside Konkona Sensharma, Radhika Madaan, Naseeruddin Shah, and Tabu. In Ajay Bahl’s The Ladykiller the Gunday actor is roped opposite Bhumi Pednekar.