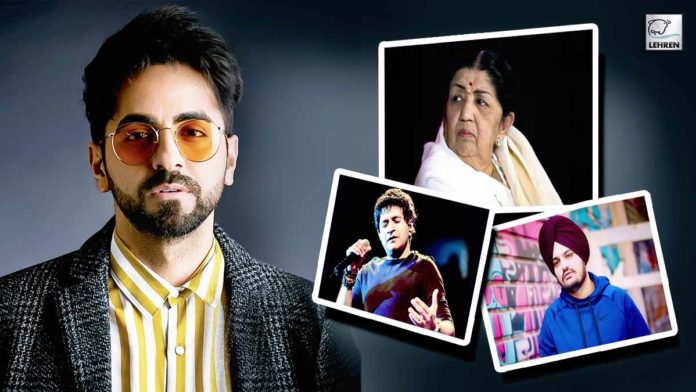 Ayushmann Khurrana remembers KK, Lata Mangeshkar, And Sidhu Moose Wala on World Music Day and also promised to come up with beautiful singles in the near future

Ayushmann Khurrana has lent his voice to many Bollywood songs along with delivering content-driven films. The actor has featured in critically acclaimed films like Article 15, Anek, Andhadhun, Shubh Mangal Zyada Savdhan, Dream Girl, and Vicky Donar among others. Not only restricting talent to acting Ayushamnn has delivered some soulful songs as well. On the World Music Day Ayushmann Khurrana has made a big announcement for people who love his songs.

Paani Da Rang, Nazm Nazm, Saadi Galli Aaja, Yahin Hu Main, are some major hits under his credits as a singer. Ayushmann has revealed on this World Music Day that people can expect some really beautiful singles from him in the near future.

As reported by IANS, the actor-singer said: “Ever since I started making music, I aspired to usher in a different sound for people. I have tried to be on that journey every time I have sung. Today, I’m really excited to tell that I have been working on some really beautiful tracks, which I can’t wait to share.”

He further added, “I have always maintained that I’m the happiest when I express through music and I’m eager to speak to people, and bare my heart and soul with these new tracks. The microphone has been my companion since my school days; it has seen me through every phase of life. So, I’m really going to pour my heart out this time with these new songs that are coming your way.”

Ayushmann Khurrana has also paid tribute to singers the industry has lost in the past years. In the memory of KK, Lata Mangeskar, and Sidhu Moose Wala, the actor penned a heart-wrenching poem. The industry suffered a huge loss and mourned the death of the gems on this world music day, Aayushmann decided to pay an ode in form of a poem.

Remembering KK, Lata Mangeshkar, and Sidhu Moose Wala, Ayushmann Khurrana shared an Instagram reel with soothing classical music from Kshmir by Nilotpal Sinha adding pictures of the three stars along with his holding a mic.

In the late hours of World Music Day (celebrated with International Yoga Day on 21st June) Ayushmann Khurrana shared the video on his Instagram handle. The singer of Yahin Hu Main captioned the post: “Jamming with my buddies to come up with something heartfelt yet new age very very soon! Sharing the pictorial yet symbolic elements of our next. But on this #WorldMusicDay…”

On the work front, Ayushmann last appeared in Anubhav Sinha’s Anek and is now working on social comedy Doctor G with Rakul Preet Singh and Shefali Shah. He also has Action Hero in his kitty.