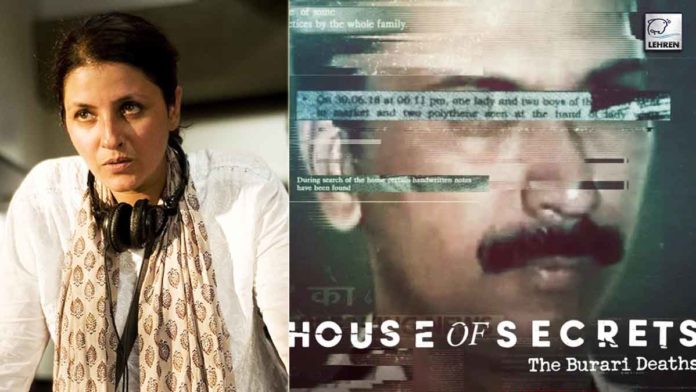 House Of Secrets: The Burari Deaths is a recently released true-crime docuseries on Netflix that explores the theories surrounding the demise of 11 members of the same family on 30 June 2018.

Streaming on Netflix is ‘House Of Secrets: The Burari Deaths’, a slickly made three-part docu-series created by Leena. Anubhav Chopra directs it with her.

India’s documentary-making comes of age with the well-shot ‘House Of Secrets’ which pieces together the puzzling mass deaths that had caused a sensation in 2018. Murder or suicide? An array of interviews with investigating officers, journalists, counsellors, neighbours, friends, surviving family members (who did not live in the same house) and glimpses into the diaries left behind by the dead, attempt to answer what led to the grisly deaths of 11 members of one family in Delhi’s Burari area. Documenting the eerie death by hanging of 10 members with septuagenarian matriarch, Narayani Bhatia found dead on the floor in the adjoining bedroom, The Burari Deaths is also AR Rahman’s first foray into scoring music for a documentary.

Leena had never met Rahman but desiring his Sufi-like touch for her documentary which required to be handled with great sensitivity, she shot off an email to his manager and struck gold. ‘House Of Secrets’ has a soft, unobtrusive background score by the maestro from Chennai.

Apart from whetting the viewer’s curiosity over what drove 11 members of the affable but tight-lipped Chundawat family to such a macabre end, what makes ‘The Burari Deaths’ an important watch is that it leaves you with the thought that society must have difficult conversations to avert such tragedies. From the nearly 80-year-old to her 14-year-old grandson, the Chundawats had unfortunately held on to a family secret, literally until the last breath.

Meanwhile, Leena herself has been the subject of a documentary made by Canada-based filmmaker Rahila Bootwala. Rahila’s documentary includes the study of two gender-equalising films by two women directors from India – Aruna Raje’s Vinod Khanna-Hema Malini film Rihaee (1988) and Leena Yadav’s Parched (2015).

Talking of gender parity, Leena has also directed seven mini shorts on a pair of siblings called Phoga and Munni from the lower strata of society. Made for an NGO called Seeds Of Awareness, the seven short films have been made with the primary aim of sowing gender sensitivity in children, families and educators. With Ajay Devgn flagging off its promo, the crisply made shorts will premiere on YouTube today, October 12, 2021.

Befittingly, Leena is one of six women directors from all over the world who was invited to make a film for an anthology titled ‘Tell It Like A Woman’. Her short film, ‘Sharing A Ride’ with Jacqueline Fernandes will share space with films that star actors like Eva Longoria and Jennifer Hudson.