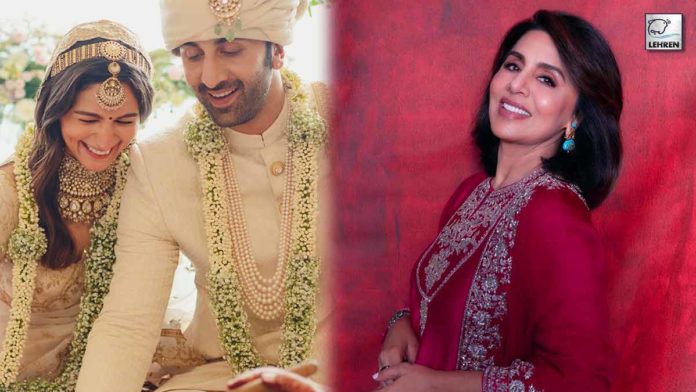 Neetu Kapoor claims to be happiest after the wedding of her son Ranbir Kapoor.

Earlier this year on the 14th of April, Bollywood’s cutest couple Ranbir Kapoor and Alia Bhatt tied knots in an intimate wedding ceremony. The announcement of their wedding came as a surprise and shocked everyone. Some believed till the end that it was a part of their film Brahmastra’s promotion. However, later digested the fact when it was officially confirmed. Recently, Neetu Kapoor mother of actor Ranbir Kapoor replied to questions surrounding the wedding.

Post the wedding, Neetu Kapoor was papped and was asked about her son’s wedding and daughter-in-law. She always tweaked the questions or sometimes responded with not much information. However, the veteran actor has now opened up and spoke about the same, two months after the wedding. She finally decided to comment on it.

Neetu revealed that Ranbir has been changed post marriage and she credits her daughter-in-law Alia Bhatt. “I am the happiest, today. She (referring to Alia) has given him a lot of love and warmth. I feel the change in him. They look good together. I am very happy and feel lucky that Alia has come into our family. So, life has really changed and I am very content. Woh tension hota hai na, shaadi nahin hui, shaadi nahi hui. Ab shaadi ho gayi (There is always that tension that he isn’t married. Now he is),”

Ranbir-Alia’s marriage was a close affair event in the presence of few family members. It has set many examples and broke the stereotype of the Indian big fat celebrity wedding. The couple picked their favorite spot in the house for the traditional rituals.  Commenting on the idea of low-key wedding, Neetu said, “It set an example for many. You don’t have to do a big wedding. You should do a wedding where you should be happy and family should enjoy. Else, hum doosre logon ko khush karne mein lag jaate hain (We just end up making others happy). We should enjoy.”

On the work front, Neetu Kapoor is a judge on the reality show Dance Deewane Juniors along with Nora Fatehi and Marzi Pestonji. The show is aired Sat-Sun 9 pm on Colors TV. The veteran actress will be seen on the big screen soon in the movie Jug Jugg Jeeyo. Set to release on 24th June, the movie also stars Anil Kapoor, Varun Dhawan, and Kiara Advani in lead roles.