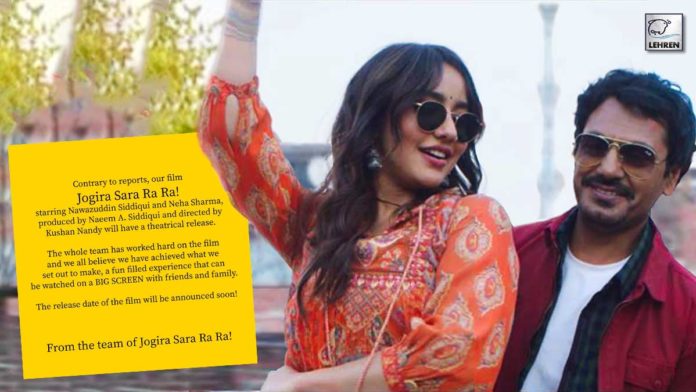 The film shot during the pandemic is already in post-production and the makers are all set to announce the release date for its theatrical release.

Contrary to reports that Nawazuddin Siddiqui and Neha Sharma starrer “Jogira Sara Ra Ra”! Is releasing directly on OTT, and the makers have clarified that the film will release in theatres.

The film shot during the pandemic is already in post production and the makers are all set to announce the release date for its theatrical release.

In a statement, the makers said, “Contrary to reports, our film ‘Jogira Sara Ra Ra’! starring Nawazuddin Siddiqui and Neha Sharma, directed by Kushan Nandy will have a theatrical release. The whole team has worked hard on it and we all believe we have achieved what we set out to make, a fun-filled experience that can be watched on a big screen with friends and family.”

The romantic comedy, directed by Kushan Nandy, and produced by Naeem A Siddiqui was shot in Lucknow and Varanasi.