Nawazuddin Siddiqui Opens Up On His RIVALRY With Irrfan Khan 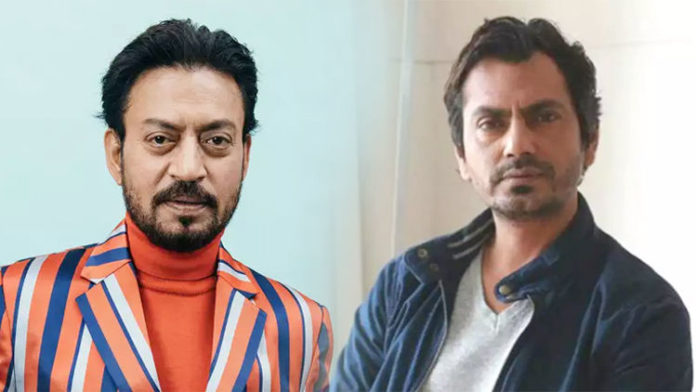 The Bollywood surely is a place of glamour and stardom but there is a constant unsaid competition between the celebs to reach the epitome of fame. The fame helps the stars gain fan loyalty which ensures that their movies will be watched and enjoyed. Given the above context, versatile actor and late actor Irrfan Khan were considered arch-rivals. However, the news of Irrfan’s sudden demise has left Nawaz shaken.

Speaking of the rivalry between him and Irrfan Khan, Nawaz said that he doesn’t understand where the rivalry stories come from. The Sacred Games actor said that he always considered Irrfan Khan as his elder brother and mentor, and he remained so till the end. He also mentioned that although he and Irrfan collaborated for The Lunchbox that is not how they met. Nawaz traced back the memories and revealed that in the year 2000 Irrfan directed him in an hour-long movie titled Alvida.

Nawaz said, “Irrfan Bhai was my mentor. He was like an elder brother, and he remained one till the end. People seem to think we came together for The Lunchbox. But our relationship went back a long way. In 2000 Irrfan Bhai directed me in an hour-long film titled Alvida. It is one of my best films. I wonder why he never directed after that. Because Irrfan Bhai had the clear-headed focus of a born director.”

The Manto actor then went on to say how he felt about working with Irrfan Khan. He said, “We also worked together in a short film called Bypass which had Asif Kapdia (who directed Irrfan Bhai in Warrior) as a producer, and then in 2013 in a film called Meridian Line. Working with Irrfan Bhai was always a pleasure. I considered him my mentor my elder brother. This relationship of respect remained unchanged until his death, although during The Lunchbox we were made out to be rivals.”

Siddiqui then said that he was embarrassed when the media pitched him against Irrfan Khan as his rival in the industry. He didn’t feel it was right but thankfully the media gossip never affected their personal equation. Nawaz also confessed that he stayed in touch with him during his illness and his untimely death has left him shaken and guessing about the uncertainty of life.

The versatile actor confessed that he will forever cherish Irrfan Khan as human and as an actor too. Nawaz then complimented the late actor’s credible acting skills and named some of Irrfan’s movies which he will forever cherish- Haasil, The Namesake, and Maqbool. He also mentioned that we could have never caught Irrfan acting, he was so good at his job.

Nawaz then concluded by saying, “He had such a long way to go. Why did this have to happen to him? I’ve seen my sister suffer and die of cancer. I know what it does to the entire family. I wish Irrfan Bhai peace in heaven and his family the strength to carry on. I will miss him.”

When Farah Khan Had A Huge Crush On Chunky Panday