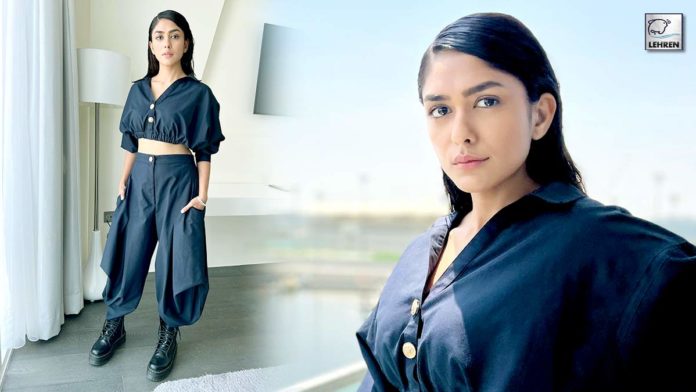 Bollywood is currently in a bad phase with netizens boycotting every other film for some or the other reason. Several films such as Samrat Prithviraj, Laal Singh Chaddha, Raksha Bandhan, Dobaaraa, and more have been hit by the Boycott trend aka cancel culture. Jersey actor Mrunal Thakur has opened up on the boycott trend getting viral on social media. Amid this trend, shows are being cancelled as theatres are going empty with fewer audiences. To this the actor said achha kaam karte raho, log aayenge aur dekhenge.

Mrunal was recently seen in the Telugu film Sita Ramam alongside south star Dulquer Salmaan. She shared her opinion on the witty trend that is impacting Bollywood. She said, “I just feel achha kaam karte raho, log aayenge aur dekhenge. I believe in good work. There’s the quote ki achha kaam karte raho, logon ka kaam hai kehna. I don’t know about others, but I am whatever I am because it my audience. Thank you to them for being honest. People should see the film, if you like it, you like it, if you don’t like it, it’s okay.”

After creating her presence from Television to Bollywood she is also exploring regional cinema. She made her Telugu debut in Sita Ramam. While the uncertainty of films making good numbers at the box office, Sita Ramam is doing well. Talking about success of film, Thakur said, “Fortunately, it is not just box office, but people are loving it too. Romance is an integral part of our lives, and I felt that romantic films were stopped being made. The kind of appreciation, and feedback I have been getting from actors from the south is just incredible. Nagarjuna sir said ‘you’re beautiful, one just falls in love with your character Sita’, to the point where his wife will scold him! I received compliments from these megastars, I don’t know what to say. Sometimes, even a thank you is less.”

She also commented on pan-India films questioning the meaning of the term. “What is a pan-Indian film first of all? It’s such a debatable topic. I am really happy to be part of this ‘Indian’ film, the fact that I have been chosen to play Sita. Today, what works is the content, audiences want to see food work, and not anything monotonous. I have been a part of Hindi and south films both. I totally understand anything you offer to the audience has to be versatile and authentic, and that’s what happens.”

Also Read: Mrunal Thakur Opened Up On Her Struggle From Television To Bollywood