Madhuri Dixit Is Excited About Maja Ma, Says Her Role Is With Complex Nuances 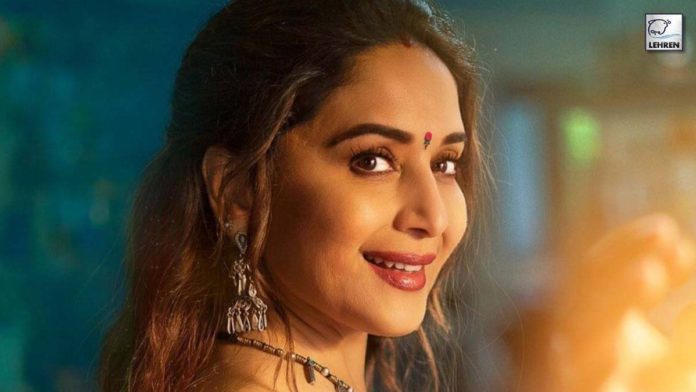 Madhuri Dixit is happy and excited about her upcoming movie Maja Ma. It is a warm light-hearted family drama set to release on 6th October. After the teaser release, the trailer of the Amazon Originals was launched today in Mumbai. Madhuri attended the launch along with other stellar casts of the movie.

Talking about her character in Maja Ma, Madhuri Dixit shared her thoughts. The Bollywood Queen portrays the character of an empowering middle-class mom of two elder kids. Maja Ma is set against the backdrop of a traditional festival and Indian Wedding. The movie promises love, heartbreak, joy, and a lot of Garba and moreover an empowering role of Madhuri Dixit.

During the trailer launch of the film, Madhuri said, “With Maja Ma, what I am most excited about is my character. It is a role with complex nuances that I have never played before. Pallavi Patel carries enormous responsibility around – as a mother, as a wife and as a contributing member of society with such ease and grace, that it becomes easy to overlook her strength, conviction, and resilience. She goes through a multitude of emotions that could have strong repercussions on her life and the lives of people she loves.”

She further added, “I am so excited to share this film with my fans and audiences. Working with the cast and crew of the film has been a lovely experience.” The Dhak Dhak girl of Bollywood is joined by Gajraj Rao Ritwik Bhowmik, Srishti Shrivastava, Barkha Singh, Rajit Kapur, and Sheeba Chaddha.

Meanwhile, Madhuri is judging the dance reality show Jhalak Dikhla Ja along with Karan Johar and Nora Fatehi. She was last seen in the Netflix series The Fame Game. The web series marked her debut on the OTT platform. The second season of the show in which Madhuri starred with Sanjay Kapoor has been dropped by the streaming channel. This means The Fame Game 2 has been canceled.

Majja Ma is directed by Anand Tiwari and written by Sumit Batheja. It is produced by Leo Media Collective and Amritpal Singh Bindra. Maja Ma will stream on October 6 only on Prime Video.