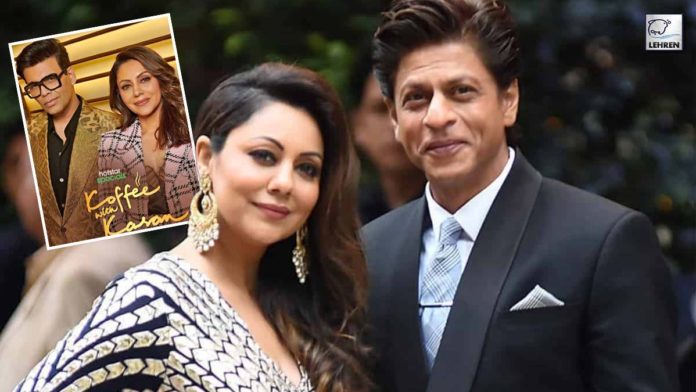 Gauri Khan reveals on Koffee With Karan that she often doesn't get hired by people because she is Shah Rukh Khan's wife.

Koffee With Karan: Bollywood actor Shah Rukh Khan’s wife Gauri Khan will soon appear on Karan Johar’s chat show, Koffee With Karan with her BFF duo Maheep Kapoor and Bhavana Pandey. While it is now reported that the celebrity wife will be seen having some interesting conversations with the filmmaker, in the latest episode Gauri will reveal that she often doesn’t get hiring opportunities because she’s Shah Rukh’s wife.

Shah Rukh Khan’s wife Gauri Khan is one of the most famous interior designers in the industry. The Bollywood superstar wife has given major house makeovers to many celebrities, however, in the latest episode of Karan Johar’s show, Koffee With Karan Gauri will reveal that people often don’t hire her because she’s Shah Rukh’s wife.

She said, “When considering a new project, there are some people who consider me as a designer. But there are also times when it does not work out that way because at times, sometimes people do not want to get attached to the baggage of working with Shah Rukh Khan’s wife. It works against me 50% of the time.”

Apart from Gauri, Maheep Kapoor will also appear on the show where she will be seen getting candid about her financial condition and the crisis she faced after her marriage. Maheep said, “There were times when Sanjay (Kapoor) was sitting at home for years with no work. Money was tight. My kids (Shanaya Kapoor and Jahaan Kapoor) have grown up seeing that along with the glamour and glitz.” Maheep further stated that her family has been one of the most renowned families in the town, which didn’t make it any easier for her, she added, “The people around me at times did make me feel like we were the unsuccessful wing of the Kapoor family.”