KWK: Anil Kapoor Reveals About Being ‘Insecure’ Of Jackie Shroff, Here’s Why 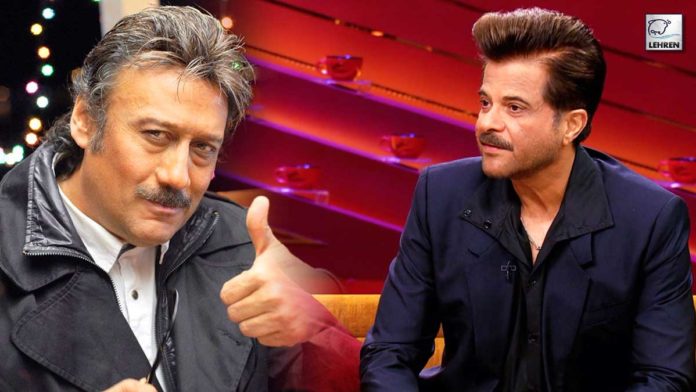 Koffee With Karan: Bollywood filmmaker Karan Johar recently welcomed JugJugg Jeeyo actors Varun Dhawan and Anil Kapoor on his chat show Koffee With Karan. During the latest episode of the show, Bollywood veteran actor Anil Kapoor revealed that he was once “insecure” and “intimidated” by Jackie Shroff’s after the latter got launched by Subhash Ghai in the industry.

Anil Kapoor Reveals About Being ‘Insecure’ Of Jackie Shroff

In the latest episode of Koffee With Karan, Bollywood filmmaker Karan Johar was seen asking the JugJugg Jeeyo actors Anil Kapoor and Varun Kapoor to share their take on the existence of “nepotism” in the Bollywood industry.

To this Anil Kapoor said that he doesn’t take it all ‘seriously’ and that if an actor is good with his/her work then their work will speak for them, “I don’t take it seriously. You just keep on doing your work and your work speaks. If you are an actor you can’t pass on the legacy to your brother or your son. It’s either you have it or you don’t have it.”

Talking about his debut and journey in the industry, Anils said that when he came into the industry there were many popular actors like Sanju (Sanjay Dutt), and Sunny Deol among others who already had claimed their spot in the industry. He further claimed that Jackie Shroff was an outsider in the industry since he had no contacts in link with the big names in the industry. However, despite being an outsider he got his first break from Subhash Ghai soon after which he rose to the success of an A-list celebrity. Anil added that it did make him kind of insecure and intimidated.

Karan then asked Anil, “Did you feel, that Jackie who was not an insider, he was an outsider who had the privilege of being launched by Subhash Ghai? You felt a little…?” Anil quipped, “I still felt it ya. The day I signed Yash Chopra’s film, I felt, ‘Oh now I’m fine’. Karan added, “Did you feel insecure about Jackie’s success at that time?” Anil responded, “Well yeah. He became a huge huge success.”

Anil then recalled an incident with Jackie Shroff on Koffee With Karan, he said, “I remember so well that and he was such a sweet guy. We would be shooting and whenever any autograph book would come to him, he knew they are taking his autograph. But (gestures Jackie passing the autograph book to Anil) ‘Sign karna (Sign it)’. I knew that actually all of them had come for him but he would give it to me. Then I would sign and then he would sign.”

Anil Kapoor and Jackie Shroff are both one of the most renowned and popular actors of their time. Both have worked together in several blockbuster hits like Ram Lakhan and Parinda, Lajja, Trimurti, Kala Bazaar, Kabhi Na Kabhi, and many more.