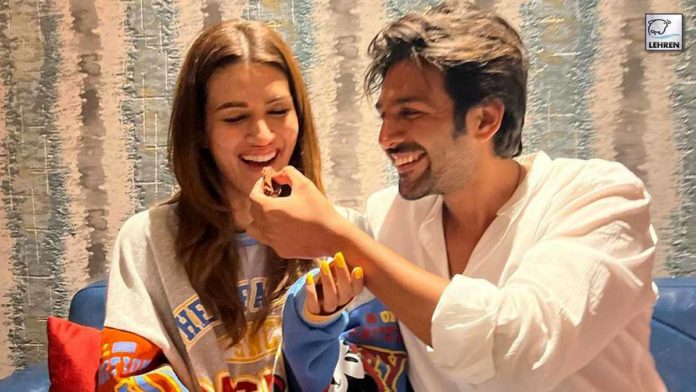 Kriti Sanon celebrated her 32nd birthday on the sets of Shehzada.

Kriti Sanon celebrated her 32nd birthday on the sets of Shehzada. The actress received a special wish from her co-actor Kartik Aaryan. He wished the birthday girl in a sweet gesture bringing a smile to her face. Both are shooting for Rohit Dhawan’s Shehzada.

Kartik and Kriti share a bond that is one of a kind. He shared an adorable picture of himself with the birthday girl on his social media. He called the birthday girl Param Sundari while referring himself as Shehzada. This comes from the context of their respective films, Param Sundari is Kriti’s hit song from the movie Mimi and on the other hand, both are working together in their upcoming film Shehzada.

In the picture, the Dhamaka actor is offering a piece of cake to Kriti, however, she didn’t eat it as she is on diet. The Luka Chuppi co-stars just posed for the picture. The click is from the sets of Shehzada where Kriti celebrated her birthday. Uploading a cute picture with Mimi star, Kartik wrote caption as his birthday wish. The caption read: “Diet Nahi todi ladki ne. Sirf pose kiya mere liye !! Happy birthday Param Sundari From Your Shehzada 🥳@kritisanon ❤️.”

To this Kriti Sanon dropped a humorous comment on Kartik’s birthday post replying to his caption. She wrote: “Thankkkk you! 🤗💖 for having all the cake after posing! 🤪” She uploaded her midnight celebration video on her Instagram story.

Kartik Aaryan and Kriti Sanon will be next seen together in Shehzada. It is touted as an action-packed family musical film helmed by Rohit Dhawan. Shehzada is a Hindi remake of allu Arjun’s Ala Vaikunthapurramuloo. The movie also stars Paresh Rawal, Manisha Koirala, Ronit Roy, and Sachin Khedekar. The movie is expected to release on 10th February next year.

Apart from Shehzada Kartik has Captain India, Freddy, and Sajid Nadiadwala’s untitled film in the pipeline. On the other hand, Kriti has Bhediya, Adipurush and Ganpath.