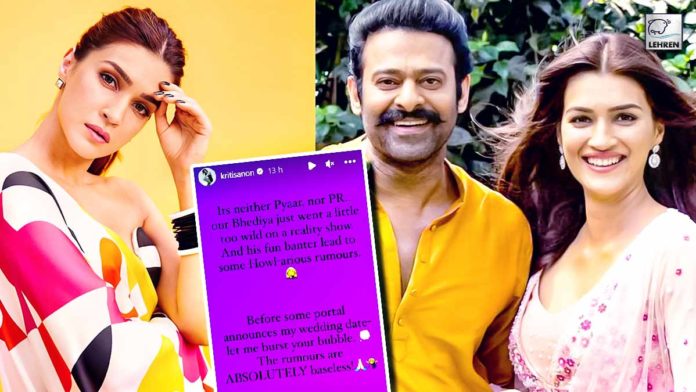 Bollywood actress Kriti Sanon finally broke her silence on rumors about getting engaged to her Adipurush co-star Prabhas.

Adipurush duo Kriti Sanon and Prabhas have lately been grabbing the attention for their rumored relationship. It was recently rumored that Baahubali actor Prabhas went down on his knees to propose to Kriti it was also reported that the two are planning to get engaged after their film Adipurush. Reacting to the same Kriti Sanon has now finally broken her silence on the matter and said that these reports are just fake rumors and speculations.

Taking to her Instagram stories, Kriti cleared the rumors and wrote, “Its neither Pyaar, nor PR. our Bhediya just went a little too wild on a reality show. And his fun banter lead to some Howl-arious rumours. Before some portal announces my wedding date-let me burst your bubble. The rumours are ABSOLUTELY baseless!”

What Were The Rumors About Kriti-Prabhas Relationship

Recently it was reported by Bollywood Life, that the Baahubali actor, Prabhas went down on his knees to propose to his Adipurush co-star, Kriti Sanon. The report also claimed that it’s a “yes” from Kirti as well. It was also stated that both the families of the actors have agreed and are happy with their relationship. On the other hand, many reports even claimed that Kriti and Prabhas will probably be getting engaged after the release of their upcoming film, “Adipurush”.

Adding fuel to the fire, Kriti’s co-star Varun Dhawan also hinted at her relationship with Prabhas. During his appearance at the reality dance show “Jhalak Dikhla Jaa”, judge and filmmaker Karan Johar asked Varun to name a few eligible single women from Bollywood.

Later Karan asked Varun why Kriti’s name was absent from the list. To this Varun said that Kriti’s name is written on someone’s heart who is currently shooting for a movie in Mumbai with Deepika Padukone. Reacting to the same many netizens claimed that Varun was hinting at Prabhas who is currently shooting for his upcoming film, “Project K” with Deepika Padukone.