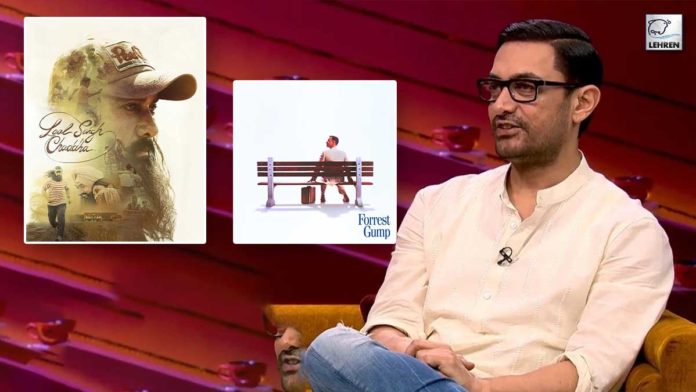 Aamir Khan opens up on the adaptation of Forrest Gump for Laal Singh Chaddha at Koffee With Karan says, "It's a well-loved film, and remaking it is tough."

During the recent appearance of Laal Singh Chaddha actors Kareena and Aamir Khan, the actors shared a conversation about their film Laal Singh Chaddha being an adaptation of Forrest Gump. Filmmaker Karan Johar mentioned the Hollywood film Forrest Gump and asked the Dangal actor about what made him do the film.

To this Aamir reacted and said, “Leaving me tensed before the release”. He further added, “Actually, to be honest, Atul wrote the screenplay in two weeks, this was 14 years ago. We came after the premiere of ‘Jaane Tu Ya Jaane na’ and he asked me about my favorite film. I said one of them is Forrest Gump. Two weeks later he called me and said, ‘I have written an adaptation of Forrest Gump’. I responded exactly the way you did, I thought who mill make Forrest Gump remake? I mean it has won so many Oscars. It’s a well-loved film and remaking it is tough. I didn’t hear his script but I was so sure that the film wouldn’t get made. It would be foolish. I didn’t even think of it but when I heard the script I just fell in love with it.”

Earlier, in an interview with IndiaToday.in Naga Chaitanya also opened up on differences between Laal Singh Chaddha and Forrest Gump, he said, “Not really. I had watched it (Forrest Gump) when I had gotten the part of Bubba. I just wanted to revisit it to observe the framework of the character. But, they are two different characters and can’t be compared at all. We have taken the framework of Forrest Gump, but the writing, nuances, and the purpose of my character are poles apart from the original.”