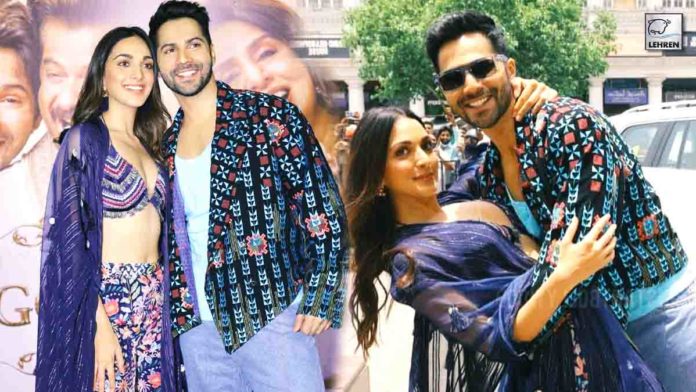 Varun Dhawan and Kiara Advani reach the capital to promote the film Jug Jugg Jeeyo and their upcoming song Punjaabban.

Bollywood actors Kiara Advani and Varun Dhawan have started their promotions for their upcoming film JugJugg Jeeyo as the duo was recently spotted at a promotional event for the film in Delhi.

On Friday, Kiara and Varun were snapped at the Mumbai International Airport as they left the city. Kiara wore a lime green dress which she teamed up with a denim jacket. The actress wore sunglasses and carried a tote bag. Meanwhile, Varun Dhawan looked stylish in black velvet tracks paired with a black pullover. Completing his look with sneakers and a black and neon backpack.

While recently the duo kicked off the promotions of JugJugg Jeeyo in Delhi with a song launch. The first song of the film is titled The Punjaabban Song. The duo was spotted together in Connaught Palace. For the event, the actress wore a floral palazzo bottom and a bralette top. While Varun Dhawan looked dapper as he wore a boho shirt with blue denim pairing it with white sneakers and shades.

The actress took her to look to Instagram and wrote, “Delhibaby”. Reacting to her picture their co-actor in the film Prajakta Koli wrote, “Bhaiyya bhabhi”. While the netizens showered the duo with love emojis.

In yet another video the actors were seen dancing on the roof of the PVR theatre in Connaught palace, as they danced to their song Punjaabban.

The film is a tale of two couples from different generations entangled around the issues post marriage. The premise beautifully merges the generation gap and puts out a unique point of view about love, but with ample humor. JugJugg Jeeyo is more about families, and the bond a married son with his father and mother played Anil and Neetu.”

The film’s trailer is already out and has largely been well received. The comedy-drama film is backed by Viacom 18 and Dharma Productions. JugJugg Jeeyo is slated to hit theatres on 24 June 2022. It also stars Anil Kapoor, Neetu Kapoor, and Maniesh Paul among others in pivotal roles.

On the work front, Kiara will be seen in a political drama ‘RC 15’ which also features superstar Ram Charan in the lead role, she also has Jug Jugg Jeeyo with Varun Dhawan, Anil Kapoor, and Neetu Kapoor. Meanwhile, Varun Dhawan will be seen in Nitesh Tiwari’s Bawaal, and Amar Kaushik’s Bhediya alongside Kriti Sanon. He also has a film to be produced by Rajkumar Hirani in his kitty.