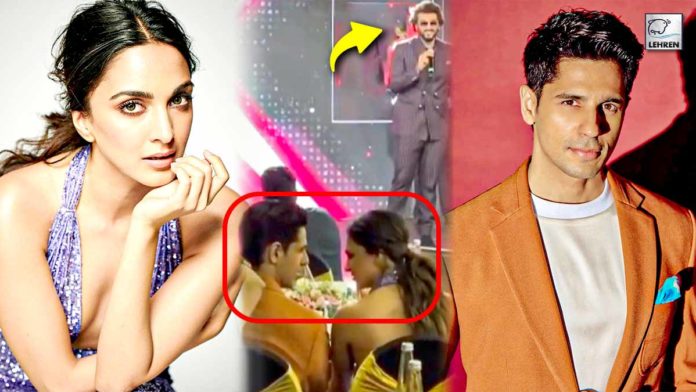 Kiara Advani and Sidharth Malhotra get busy in conversation as Arjun Kapoor deliver his speech, netizens say, 'lost in their own world'.

A recent video of Kiara Advani and Sidharth Malhotra has been making rounds over the internet. The duo was recently spotted at the awards night held in Mumbai on Thursday. The viral video features Kiara Advani and Sidharth Malhotra sitting next to each other as both seem to be lost in a conversation with each other during Arjun Kapoor’s award-winning speech.

The actor won the style icon award on the award night, in his award-winning speech Arjun said, “Been a while, I am not used to winning awards. Mould-Breaker – yes, my mould has gone out of shape and I had to remould my career and myself for all the people who pay good money to watch our work.”

While reacting to the viral video, netizens shared their epic reactions. A user wrote, “Please get married soon”, and another user commented mentioning the duo’s marriage, “Get them marry as soon as possible”, “Busy in own world #sidkiara.”,  “They’re in their own world while arjun is giving his winning speech.”, commenting about their conversation a user shared his reaction and wrote, “Sidd pyar say samjha rahe ha or ma’am argue kar rahi ha aisa lag raha ha ki aap time per kyu nahi aaye”.

During the event, Kiara was spotted wearing a sequin gown in muted lavender with a backless pattern and plunging neckline. While Sidharth Malhotra wore an orange suit and blue shoes. In yet another video, Sidharth was seen dancing along with Kiara and other celebs on stage to The Punjaabban Song from, JugJugg Jeeyo. Style Icon Awards was held in Mumbai on 16 June. Many celebs like Karan Johar, Ranveer Singh, Radhika Madan, Masaba Gupta, Karan Kundrra, Tejasswi Prakash, Anil Kapoor, Kriti Sanon, and Kartik Aaryan were spotted attending the event.

Sidharth Malhotra and Kiara Advani started dating on the sets of ‘Shershaah’. Recently, several media reports claimed that Sid and Kiara had parted ways. However, their recent spotting and inside sources claimed that they have put the differences aside and are back together again.

On the work front, Sidharth Malhotra has several exciting projects in his basket. He has has ‘Yodha’ with Disha Patani and ‘Mission Majnu’ with Rashmika Mandanna. He also plays the lead in Rohit Shetty’s first web series ‘Indian Police Force’. It also stars Shilpa Shetty and will stream on Amazon Prime Video.

On the other hand, Kiara Advani was recently seen opposite Kartik Aaryan in Bhool Bhulaiyaa 2. Currently, she is busy promoting her next film ‘JugJugg Jeeyo’, also starring Varun Dhawan, Anil Kapoor, and Neetu Kapoor.