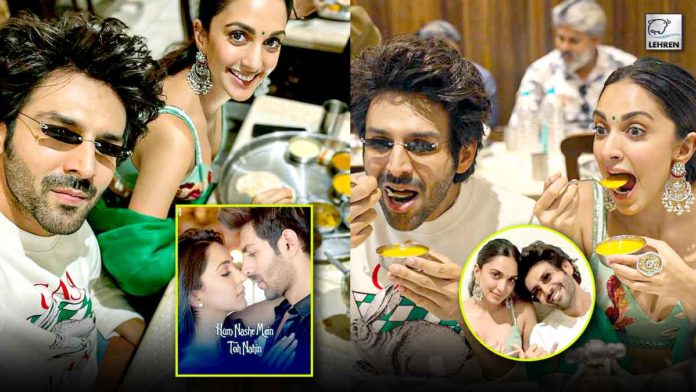 Bhool Bhulaiyaa 2 actors Kartik Aaryan and Kiara Advani took their film promotions to Gujarat, shares a glimpse of their visit.

Kiara Advani and Kartik Aaryan are busy promoting their upcoming film Bhool Bhulaiyaa 2. The duo is currently in Ahmedabad promoting their movie, which is slated to hit the theatres on May 20, 2022.

The actors shared their pictures and videos during their break. Actress Kiara took to her Instagram stories and shared a boomerang video, featuring her with Kartik. In the video, they can be seen sitting in a restaurant enjoying delicious delicacies. Sharing the video, she wrote, “Can you guess where we are”.

While the lead actor Kartik Aaryan also shared some stills and videos on his Instagram account, he captioned his post, “Kem cho Amdavad”. Sharing his pictures with the co-actor Kiara the duo could be seen enjoying the huge thali as their meal. In the third video, the actors played a maze puzzle ironically the game is called bhul bhulaiya in Hindi. The actor also shared the click of miniature dessert.

On Tuesday, Kiara Advani shared an adorable post on her Instagram handle with her fur buddy, and we are in awe of it. In the post, she is lovingly looking at Ram Charan’s pet dog. She captioned the post as “One for the books! Best breakfast date ever was pawsomee.” While actor Kartik Aaryan was also spotted in Dubai for a football match with Ranbir Kapoor and Abhishek Bachchan.

On the work front, Kiara and Kartik’s Bhool Bhulaiyaa 2 is the sequel to Akshay Kumar and Vidya Balan’s Bhool Bhulaiyaa, which release in 2007. Apart from Kartik and Kiara, the film also stars Tabu and Rajpal Yadav in pivotal roles.

ALSO READ: Kartik Aaryan Reveals Why He’s Not Getting Married, His Response Will Leave You In Splits