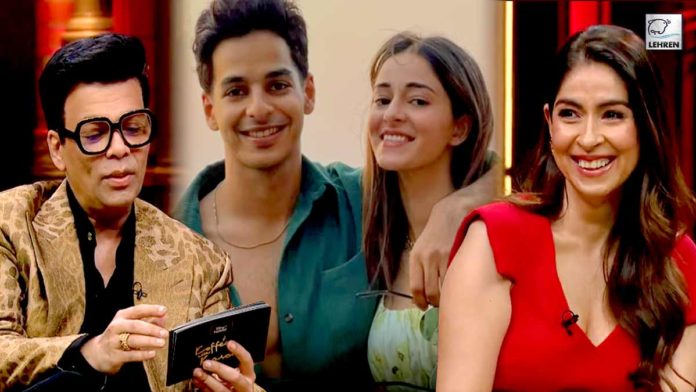 Karan Johar talks about Ananya Panday's relationships and says she has "two-timed", defending Ananya Bhavana said, "She was oscillating between"

Koffee With Karan: The latest episode of Koffee With Karan was graced by Chunky Panday’s wife and Ananya Panday’s mother Bhavana Panday with Maheep Kapoor and Gauri Khan. During the episode, the b-town wives were seen getting candid about their children’s dating and love life. While Karan was seen claiming that Ananya had dated two boys at the same time. To this Ananya’s mother, Bhavana said, “She was oscillating in between”.

During the rapid-fire segment Karan asks Gauri to give dating advice to her daughter Suhana Khan, he asked, “The one advice you gave Suhana about dating.” To this Gauri replied, “Never date two boys at the same time. Never.”

He later passed the same question to Ananya Panday’s mother Bhavana Panday and said, “I think Ananya has done that already.” A surprised Bhavana said, “Has she?”. Agreeing with Karan, Bhavana said, “Ya. I think she was oscillating in between.” She added, “No, she was thinking of two so she broke up with one.”

Ananya Panday Talks About Her Relationships On KWK

Earlier during her appearance at Koffee With Karan, Ananya Panday was seen getting candid about her dating life and previous relationships. Ananya said, “I am single. No ýone is asking but I am single” and Karan asked, “You broke up with Ishaan.” He added, “You were dating Ishaan, then you broke up. Come on, everybody knew you were dating Ishaan.”

Karan asked Ananya if she was dating Kartik Aaryan, to this she said, “We are just good friends.” She also mentioned that she finds Aditya Roy Kapur “very hot”. Meanwhile, after Ananya, Phone Bhoot actor Ishaan Khatter also appeared on the show, talking about his current equation with Ananya, Ishaan said, “Yeah, I mean, I would hope to have her as a friend for the rest of my life. She is one of the most wonderful people I have known. She is a sweetheart, she really is. Anyone who has met her would say this. She genuinely is a sweetheart. And all pulpy questions aside, she is someone who is very dear to me and will always remain so.”