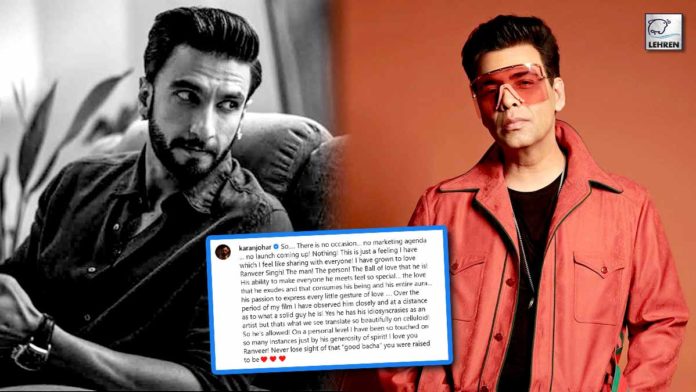 Bollywood actor Ranveer Singh heaps praise from filmmaker Karan Johar. In a long note, Karan wrote, "Never lose sight of that “good bacha” you were raised to be".

On Friday, filmmaker Karan Johar took to his Instagram and shared a picture of Ranveer Singh with a long note. In the note, Karan wrote, “o…. There is no occasion… no marketing agenda … no launch coming up! Nothing! This is just a feeling I have which I feel like sharing with everyone! I have grown to love Ranveer Singh! The man! The person! The Ball of love that he is! His ability to make everyone he meets feel so special… the love that he exudes and that consumes his being and his entire aura… his passion to express every little gesture of love ….”

He further wrote, “Over the period of my film I have observed him closely and at a distance as to what a solid guy he is! Yes he has his idiosyncrasies as an artist but thats what we see translate so beautifully on celluloid! So he’s allowed! On a personal level I have been so touched on so many instances just by his generosity of spirit! I love you Ranveer! Never lose sight of that “good bacha” you were raised to be(heart emojis)”.

Reacting to the post many Bollywood celebrities shared their reactions, Gully Boy actress Alia Bhatt commented, “Best human ever “, JugJugg Jeeyo actor Anil Kapoor commented with heart emojis, meanwhile netizens also shared their reactions, a user wrote, “I have never seen anyone say anything bad about Ranveer, everyone loves him, that’s what being a nice human being brings you.”, another user wrote, “Agreed!! We Need more ppl with his positive energy in the world!!”.