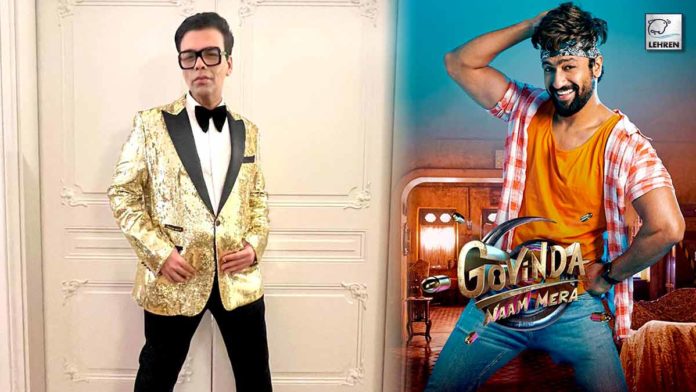 The trailer of Govinda Naam Mera was released yesterday at a big event in Mumbai. Present at the event were the leading star cast and makers. The upcoming movie features Vicky Kaushal, Kiara Advani, and Bhumi Pednekar. The Shashank Khaitan directorial is a fun ride and quirky outing. However, the makers have decided to skip theatrical releases and opted for a direct OTT release.

At the trailer launch of Govinda Naam Mera, a journalist asked why the decision to skip a theatrical release was taken, especially when the film has several whistles and clap-worthy moments that would have made it an ideal watch on the big screen. Karan Johar who has bankrolled the film replied to the question.

He said, “We ourselves have created this divide that commercial films are for theatres and the slightly off-the-cuff films are meant for digital. We realised that Disney+ Hotstar is a wild platform. Jitne gharon tak unka reach hai, utne cinema halls nahin hai hamare desh mein. So I believe ki yeh mainstream masala entertainer ko bahut khoobsurat ghar mila hai. So, there were no second thoughts. I guarantee you that the whistles and claps would reach us.”

Govinda Naam Mera produced by Dharma Productions is reportedly sold to Star network. The deal was closed at no profit no loss. The movie has been sold at a whopping amount of 62 crores, which can be bifurcated as the digital rights account for 42 crores, and the satellite rights at Rs. 20 crores. Govinda Naam Mera will release on Disney+ Hotstar on 16th December 2022.

Govinda Naam Mera is a comic entertainer written and directed by Shashank Khaitan. The film stars Vicky Kaushal, Kiara Advani, and Bhumi Pednekar in the lead roles. It is produced by Karan Johar under the banners of Dharma Productions. The much-awaited film of Vicky will release on December 16, 2022, on Disney+ Hotstar.

Also Read: Karan Johar Is Upset Over Not Getting Due Credit For Making Different Films