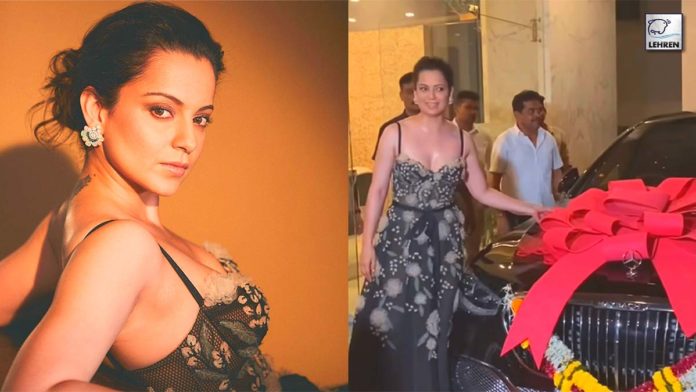 Kangana Ranaut unveils her new Mercedes May Bach with her family in the viral video.

Bollywood actress Kangana Ranaut is busy promoting her new release Dhaakad, while recently the actress gifted herself a brand new Mercedes May Bach worth 3.5 cr rupees. The actress was spotted with her new car as she posed for the paparazzi at the Dhaakad screening held on May 19.

After attending the premiere of her film “Dhaakad” actress Kangana Ranaut unveiled the look of her latest car Mercedes May Bach S680 on Thursday as she posed with her family members. The cost of the car is around 3.5 crore and has recently been launched in India. The car is the top model in the Maybach S-Class series. It boasts of a mileage of 7.52 kmpl and a 5980 cc engine.

In the viral video, the actress was spotted with her family and the brand new car, as two people remove the cover of the car. On seeing a huge ribbon flower placed on the bonnet, Kangana asks someone if she can remove it as “I look like just married”. She removes the ribbon and opens the car door to check it out. Along with Kangana, a video of her mother is also going viral on the internet. In the clip, the actress’ mother is seen doing the ‘Arti’ of the vehicle in the Indian traditional way.

During the unveiling of her car, Kangana was spotted wearing a floral tulle dress, Kangana attended the premiere of Dhaakad with her parents, sister Rangoli Chandel, and her son Prithviraj, brother Aksht Ranaut and sister-in-law Ritu Sangwan.