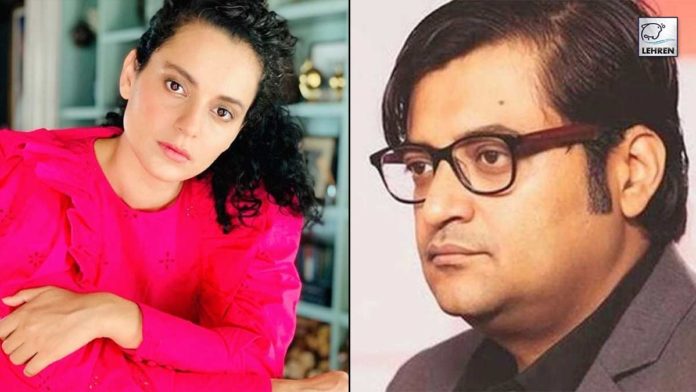 Kangana Ranaut has reacted via a video message as journalist Arnab Goswami gets arrested by the Mumbai Police at his house this morning. Read below for further details.

According to the reports available with ANI, Arnab Goswami said that the Mumbai Police physically assaulted his mother-in-law, father-in-law, son, and wife. Now, the Queen actress taking to her social media handle shared a video addressing the Maharashtra Government.

As everyone is quite aware of Kangana’s feud with the Maharashtra Government. Thus, this doesn’t come as surprise.

In the video, Kangana Ranaut reacts to Arnab Goswami getting arrested by the Mumbai Police by putting a hashtag #ArnabWeAreWithYou.

In her video message, Kangana allegedly takes a subtle dig at the Maharashtra Government. She also asks them how many more voices are they going to bring down and how long will this all prevail.

Speaking of the reason behind Arnab Goswami’s arrest, he has been taken into custody for his connection with a suicide case. The case is of an interior designer Anvay Naik who allegedly took his own life.

The case for abetment to suicide has its registration in Raigad. In this case, the family alleges that the suicide is over non-payment of bills.

For quite some time now, journalist Arnab Goswami has been the talk of the town because of his outspokenness in the SSR case. While many didn’t like it others praised him for the same.