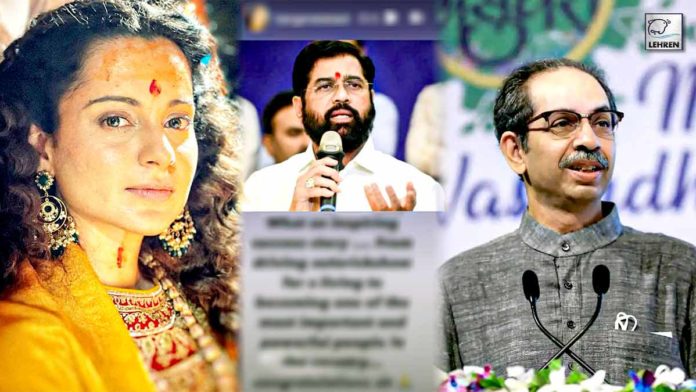 Bollywood actress Kangana Ranaut who apparently has a major tiff with the ex- Maharashtra CM Uddhav Thackeray recently took to her social media and praised the newly Maharashtra chief minister Eknath Shinde. The actress shared a post on her Instagram stories as she lauded the new CM. See the post-

Bollywood actress Kangana Ranaut recently took to her social media and wrote, “What an inspiring success story… From driving auto-rickshaw for a living to becoming of the most important and powerful people in the country… congratulations sir.” In the post, the actress praised the new Chief Minister of Maharashtra, Eknath Shinde.

Meanwhile, yesterday the actress shared a video message as she took a dig at Maharashtra’s Ex-Chief Minister Uddhav Thackeray as he gave his resignation from his post. Sharing the video Kangana captioned the post and wrote “When evil takes over, destruction is imminent. After that, there is creation. The lotus of life blooms,”.

The video starts with Kangana saying “After 1975, this time is the most significant time for Indian democracy. In 1975, politician JP Narayan challenged the throne and the throne had fallen. In 2020, I said that democracy is trust. Whoever breaks this trust under the pride of politics, it’s certain that their own pride will be crushed. This isn’t the power of a specific personality, this is the power of a true character. Hanuman Ji is considered the 12th avatar of Shiv. When Shiv Sena itself bans Hanuman Chalisa, even Shiv cannot save them. Har Har Mahadev. Jai Hind. Jai Maharashtra,”.

For the unversed, actress Kangana Ranaut always had a tiff with Shiv Sena, the actress earlier called Uddhav Thackeray the ‘worst product of nepotism’. She earlier tweeted “You should be ashamed of yourself chief minister, being a public servant you are indulging in petty fights, using your power to insult, damage, and humiliate people who don’t agree with you, you don’t deserve the chair you have acquired by playing dirty politics. SHAME.”

Uddhav Thackeray submitted his resignation to state Governor Bhagat Singh Koshyari in Raj Bhavan on Wednesday. Thackeray had made the announcement about his resignation minutes after the Supreme Court on Wednesday allowed floor test in the Maharashtra assembly on Thursday. Meanwhile, the political party BJP has now appointed their candidate Eknath Shinde as the new Chief Minister of Maharashtra.