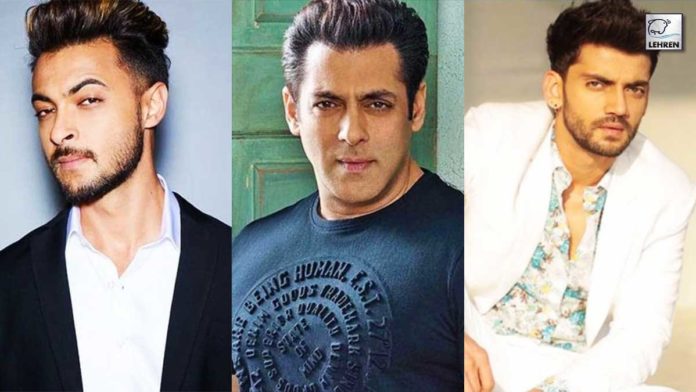 Kabhi Eid Kabhi Diwali is on the top of the headlines after changes in the cast were highlighted. In our previous story, we have reported that despite starting the shoot Salman Khan’s brother-in-law Aayush Sharma walked out of Kabhi Eid Kabhi Diwali. He had shot one day’s portion before finding out the creative difference. It is also noted that Zaheer Iqbal will also no longer be a part of the year-end film. It was Salman Khan who launched Aayush and Zaheer in Bollywood with Loveyatri and Notebook as their debut movie respectively. The makers of the film are now in search of actors to replace Aayush and Zaheer.

Salman Khan thought to unite both newcomers in his film Kabhi Eid Kabhi Diwali. Antim actor stepped into Bollywood in 2018 with Loveyatri alongside Warina Hussain. On the other hand, Zaheer starred opposite Pranutan Bahl (daughter of Mohnish Bahl) in his debutant film Notebook in 2019. Both were supposed to work again under the Salman Khan Films banner but to fans surprise the cast of the upcoming film will be changed.

The big question that arises is who will fill the void of Aayush and Zaheer in Kabhi Eid Kabhi Diwali. Reports say that Salman Khan’s co-star Bhagyashree’s son Abhimanyu Dassani will be roped in to replace either of the actors. Salman Khan worked with Bhagyashree in Tere Naam and since then they form a good bond. To believe reports, growing up the friendship Dabaang star approached Abhimanyu to get in the line.

Talking about another actor, Meezaan Jafri, son of Jaaved Jaffrey is expected to be a probable substitute for Aayush Sharma or Zaheer Iqbal. Meezaan made his debut film with Bollywood’s renowned filmmaker Sanjay Leela Bhansali. Meezaan Jafri began his filming career with Malaal starring opposite Sharmin Segal in 2019.

The makers are considering Abhimanyu Dasani and Meezaan Jafri to replace Aayush Sharma and Zaheer Iqbal after they walked out. Shehnaaz Gill is also rumored to make her Bollywood debut with Kabhi Eid Kabhi Diwali. The Punjabi Singer received fame from Bigg Boss season 13, where she developed a friendship with the late Sidharth Shukla and the host Salman Khan. Amongst others, Sooraj Pancholi and Pooja Hegde are roped in the star cast of the film.

On the work front, Abhimanyu Dassani will be next seen in Nikamma with Shirley Setia after his debut movie Mard ko Dard Nahi Hota in 2019. Further, he made his web debut with Meenakshi Sundareshwar. While Meezaan Jafri appeared in Malaal and Hungama 2.

Owing to major changes in the star cast a delay is expected in the release which was initially supposed to go on floors in December. We are sad to inform you that fans who are eagerly waiting for the film will have to count more days on the calendar.