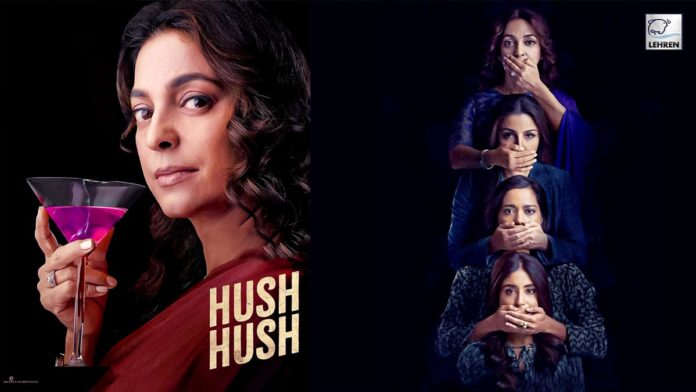 Hush Hush is seven episodes thriller web series. It is created by filmmaker Tanuja Chandra who is known for Dushman, Sangharsh, and Qarib Qarib Singlle. According to the show’s official synopsis, “Hush Hush is a knitted in a web of lies, deceit and fighting patriarchy, the story explores the storm that brews behind the seemingly quiet facade of the privileged lives of these women.”

Amazon Prime Video made the announcement quietly rather than making it noisy. The streaming platform shared the poster on the official Instagram account. The copy of the post read, “Wanted to make some noise coz it’s announcement day, but we’d rather keep it hushhh #HushHushOnPrime, Sep 22.”

Soha Ali Khan who made her digital debut with Kaun Banegi Shikharwati, is now gearing up for second web series. She said, “Hush Hush is gritty and real. Often, we would be wearing the same costumes for days and sport no makeup. We had to showcase our raw emotions. So, it was an exhausting and emotionally draining shoot. As an actor, it made me empty myself in a way that I haven’t done in a long time.”

The Pataudi daughter revealed that Hush Hush is her first collaboration with Juhi Chawla. It is surprising to know the two ’90s actresses never shared screen until now. Soha added, “This was my first collaboration with Juhi, but I don’t have many scenes with her. The story mainly revolves around Kritika, Shahana, and my character. Since we are good friends off-screen, it helped the dynamics.”

Hush Hush is suspense thriller series revolving around few women’s life that goes upside down after an incident. It is directed by Tanuja Chandra and produced by Vikram Malhotra-led Abundantia Entertainment. It will premier on Amazon Prime Video on September 22.