JugJugg Jeeyo: Karan Johar Accused Of Plagiarism By A Writer On Twitter 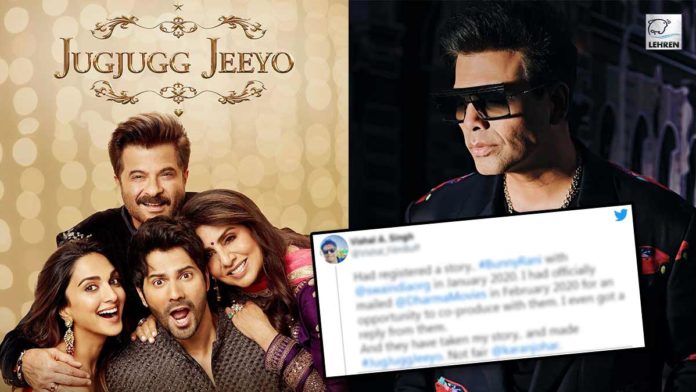 A Twitter user slams Karan Johar for copying his script for the upcoming film JugJugg Jeeyo.

The trailer of the film JugJugg Jeeyo was launched on May 22 with the whole team cast including Kiara Advani, Varun Dhawan, Anil Kapoor, and Neetu Kapoor. Soon after the release of the trailer, a Twitter user claimed that filmmaker Karan Johar has copied his story for the film.

The trailer of the much-anticipated film JugJugg Jeeyo has been well appreciated by the audience after its release on Sunday, May 22. A screenwriter named Vishal A. Singh recently accused director Karan Johar of copying his story for his film Jug Jugg Jeeyo. Vishal A. Singh posted a series of tweets including screenshots on his Twitter account alleging that Dharma Productions has copied his story titled Bunny Rani, whose extract he had mailed to the production house, into Jug Jugg Jeeyo.

Accusing the makers, he wrote, “Had registered a story.. #BunnyRani with @swaindiaorg in January 2020. I had officially mailed @DharmaMovies in February 2020 for an opportunity to co-produce with them. I even got a reply from them. And they have taken my story.. and made #JugJuggJeeyo. Not fair @karanjohar”.

Followed by another screenshot which he mailed to the Dharma Productions he wrote, “Please read extract of the synopsis of #BunnyRani I had mailed to @DharmaMovies in Feb 2020. And then go on to watch the #JugJuggJeeyo trailer and judge by yourself.”

He further posted, “Am aware that what happened with me is happening in the #HindiCinema industry all the time. That doesn’t mean.. I should shut up? I have chosen to raise the flag coz I want this malpractice to stop. This can’t go on forever. #BunnyRani #JugJuggJeeyo.”

Concluding the tweets, he wrote, “he wrote, “If what am saying is wrong.. @DharmaMovies should act strongly against me? And if am right.. #Dharma and @karanjohar
should start the #TruthAndReconciliation process. If #HindiCinema has to prosper.. serious issues can never operate in grey zone? What do you think?”.

On the other hand, Pakistani singer Abrar Ul Haq also accused Jug Jugg Jeeyo makers of using his song in the trailer. Taking to his Twitter account, he wrote, “I have not sold my song “Nach Punjaban” to any Indian movie and reserve the rights to go to court to claim damages. Producers like @karanjohar should not use copy songs. This is my 6th song being copied which will not be allowed at all.”