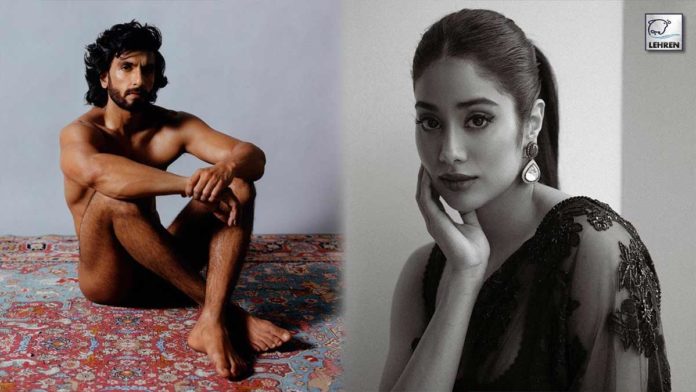 Actress Janhvi Kapoor reacts to Ranveer Singh's n*de photoshoot, and says, "I think it's artistic freedom and I don't think anyone should be penalized for their artistic freedom."

Ranveer Singh has undoubtedly created quite some buzz with his n*de photoshoot, for which the actor has also got booked by an NGO for hurting the sentiments of women. However many Bollywood celebrities have come in support of the actor and the latest to join the row is actress Janhvi Kapoor who recently spoke about the matter and said, “I think it’s artistic freedom”.

Soon after which many actors came in support of Ranveer Singh as they expressed their views on the matter. While now actress Janhvi Kapoor has also extended her support to the actor as she expressed her views on Ranveer’s photoshoot, in a video shared by Pinkvilla Janhvi Kapoor said, “I think it’s artistic freedom and I don’t think anyone should be penalized for their artistic freedom.”

Recently actress Vidya Balan also shared her hilarious reaction to the news and said, “Arre kya problem hai? Pahli baar koi aadmi aisa kar raha hai, hum logo ko bhi aankhein sekhne dijiye na (What’s the problem. It’s the first time someone is doing this, let us also enjoy it).” Talking about the FIR against the actor, Vidya said, “Maybe they(people who filed FIR) don’t have much work to do, hence they are wasting their time on these things. If you don’t like it, then close the paper or throw it, and do what you wish to. Why get into an FIR?”.

Apart from Vidya many actors have come in support of the actor, The Kashmir Files director Vivek Agnihotri recently called the FIR ‘stupid’ he further questioned when there are so many nude pictures of women, doesn’t that hurt the sentiments of men. Ranveer’s friend and Gully Boy co-star Alia Bhatt also extended support to the actor and said, “I don’t like anything negative said about my favorite Ranveer Singh. Toh main yeh question ko bardash bhi nahi kar sakti hu (so the question itself is something I can’t tolerate).” Apart from them actor Arjun Kapoor, Pooja Bedi, Swara Bhasker, and Ram Gopal Varma among other celebrities have also shown support for the actor.