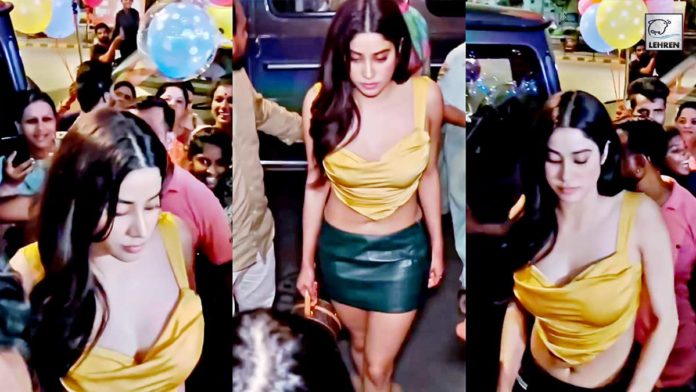 We usually see celebrities getting trolled for no reason. It seems like trolling has now become a part of every celebrity’s life. Netizens target many actors and actresses for their dressing style, attitude, stints, statements, or for any other reason. Recently, popular star kid Janhvi Kapoor became the victim of trolling.

Bollywood’s popular actress Janhvi Kapoor was recently spotted with her best friends Shanaya Kapoor and Ananya Pandey heading for a dinner outing. The paps caught the actress on camera. While the actress was making her way to the restaurant, she was thronged by the paparazzi, security, as well as her fans. Amidst the hysteria of fans, a female fan tried to click a selfie with the actress. Unfortunately, the fan could not get a photo with the actress as the star kid did not respond to the girl. Janhvi Kapoor straight away walked to the restaurant which made many netizens angry.

Many users are trolling the actress for the same. Janhvi got brutally trolled for ignoring the female fan and walking straight to the restaurant without clicking a picture. One user wrote, “Her face is saying get lost all. I’m a rich girl. I don’t want to click pictures with clumsy people, give me some space”

While on the other hand, another netizen commented, “I hope people do realize that this lady has done enough surgeries before entering Bollywood. Very smart move by her mom. Stop treating her like a diva. These wannabe star kids. They don’t deserve the honor of talent.”

Must Read: Will Aamir and Kareena’s ‘Laal Singh Chaddha’ Have A Sequence On The Babri Masjid Case?