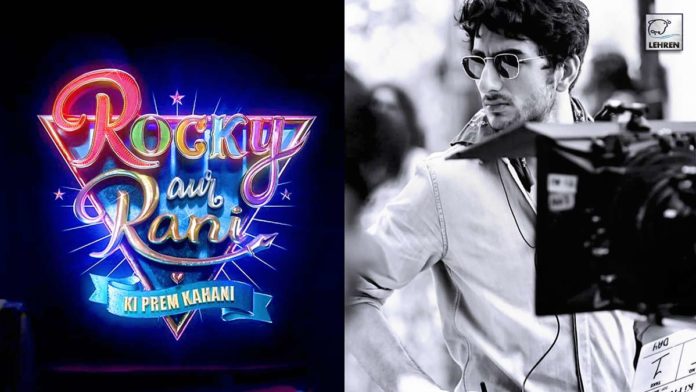 After Sara Ali Khan, Saif Ali Khan’s elder son Ibrahim Ali Khan is now also grabbing headlines as he recently got spotted at the set of the Karan Johar’s upcoming flick, ‘Rocky aur rani ki prem Kahani. A picture of Ibrahim has been going viral and making rounds over the internet.

A picture of Ibrahim has been shared by a paparazzi account in the monochrome photo, Ibrahim looks dapper in a casual shirt and cool sunglasses. He has been shot candidly by someone on the set of the movie. Standing behind the camera, Ibrahim is seen holding the clapboard of the film.

Ibrahim is currently assisting Karan Johar in his upcoming film, ‘Rocky Aur Rani Ki Prem Kahani’. Many pictures and videos from the sets of the film featured Ibrahim, which captured all his fun moments with the cast and crew.

Coming on board as the official music partner for “Rocky Aur Rani Ki Prem Kahani”, cements the relationship strategically. With a galaxy of some of the biggest stars on board for the film, coupled with the musical sensibilities of Karan Johar and Pritam who score the music. this is a significant acquisition in the Saregama portfolio of film music, one which has been rapidly increasing in recent times.

Reportedly, filmmaker Karan Johar is looking for an appropriate project for Saif and Amrita’s son. According to the media reports, the filmmaker has decided to adapt the last year’s super hit Malayalam romantic drama Hridayam for Ibrahim. The reports also suggest that for the popular filmmaker the character arc of the protagonist in Vineeth Sreenivasan’s directorial venture is absolutely appropriate for Ibrahim Ali Khan.