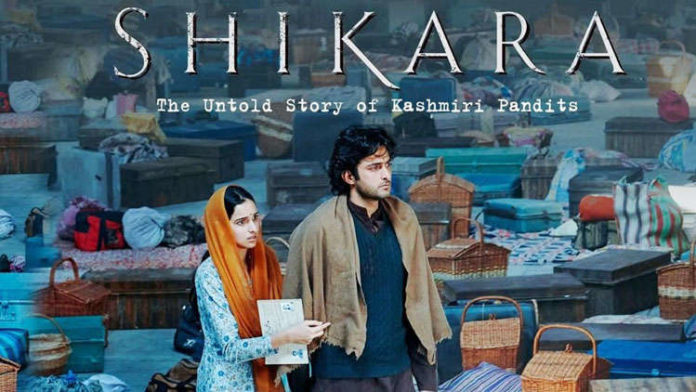 Here we list down some reasons, why you should watch Vidhu Vinod Chopra’s love letter from Kashmir, Shikara- The Untold Story Of Kashmiri Pandits.

There are films based on Kashmir which captures the scenic beauty, snowy mountain, and what not, then there’s SHIKARA, the film that actually shows the ground reality of Kashmiri people and what they went through. However, people might claim that Shikara is made to whitewash the image of some community, but that’s not the case with this film.

Shikara is narrated with the backdrop of newly wedded Shanti and Shiv’s love story and we are with them throughout their struggle. The film beautifully captures the unknown side of Kashmir and its people. The film holds your attention and at many point Shikara wrenches your heart in pain. In no way the film portrays Kashmir or its people in a bad light, instead, Vidhu Vinod Chopra keeps his direction tight and focusses more on the lead characters’ battle against time.

Newcomers Sadia and Adil Khan nails their respective characters and their acting skills prove that they are here to stay in Bollywood for a long time. All the characters connect well, no actor seems dragged nor they are portrayed unnecessarily in any frame. Priyanshu Chatterjee’s role is small but very impactful also, Lateef who is shown as Adil’s best friend in the movie outshines in many scenes.

A. R. Rahman’s background score steals your heart. The soul-stirring score takes you to the scenic valley of Kashmir and is enough to give you goosebumps. The film marks the first collaboration between music maestro A.R. Rahman and director Vidhu Vinod Chopra.

More than 4000 real Kashmiri pandits have come out and acted in the film and recreated the actual scenario from 1990. The film marks the first of its kind to have real refugees acting in such sensitive films.

Like we previously said, the film doesn’t try to whitewash or degrade any community’s image. More than 400, 000 Kashmiri pandits were forced to leave their home and live as refugees in their own country. However, no media or politicians tried to help them when things were out of hands. Vidhu Vinod Chopra pleasingly brings out their real emotions and pain in the mainstream cinema.