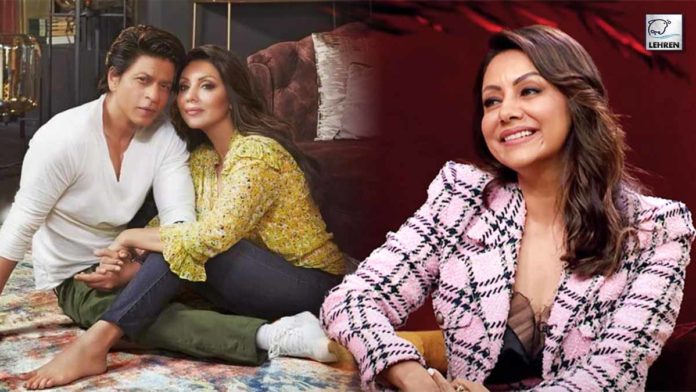 Bollywood actor Shah Rukh Khan’s wife Gauri Khan will soon appear on Karan Johar’s chat show, Koffee With Karan with her BFF duo Maheep Kapoor and Bhavana Pandey. While it is now reported that the celebrity wife will be seen having some interesting conversations with the filmmaker, Gauri will share some of the most annoying habits of SRK saying that he always sees off his guest to their cars which annoys her a lot.

“Shah Rukh Sees Off Their Guest To Their Cars” Says Gauri

As per a Mid-day report, SRK’s wife and interior designer Gauri Khan will talk about hosting parties with Karan Johar. To which the filmmaker will be seen praising SRK for being a good host. However, Gauri doesn’t agree with Karan here, as she will then reveal that Shah Rukh is a good host but his habit of seeing off the guests to their cars annoys her a lot.

Talking about SRK, Gauri says, “He is always seeing off the guest to their car. Sometimes, I feel like he spends more time outside than inside the house during parties. Others start looking for him, and I feel as if we are having the party outside on the road,”.

Apart from this, Gauri will be seen talking about her daughter as she gives her relationship advice on not dating two boys at a time. She also says that she would want to title her love story with Shah Rukh “Dilwale Dulhania Le Jayenge” as she loves the film.

For the unversed, Gauri Khan will be appearing on the show after 17 long years. The Bollywood star wife earlier made her appearance back in 2005 with Hrithik Roshan’s ex-wife Sussanne Khan. Opening up on the same Gauri recently revealed the reason why she didn’t appear on the show.

In a conversation with Bollywood Hungama Gauri said, “I think he has never asked me. In 18 years, he has asked me once. Maybe he didn’t ask me, I don’t even remember, it’s been so many years. He is a friend and it was even more fun because I was coming with Maheep and Bhavana and I knew that it’s going to be a lot of gup shup (gossip), chat, and fun.”

ALSO READ: Gauri Khan Reveals Why She Didn’t Appear On Koffee With Karan In Last 17 Years