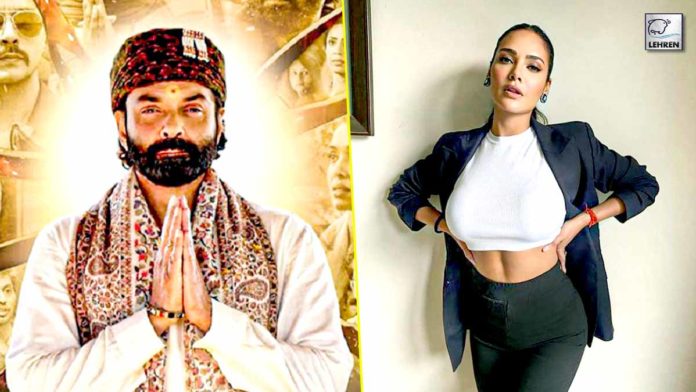 Esha Gupta will essay the role of an image-makeover specialist in Aashram season 3.

After receiving whopping success for seasons 1 and 2, Aashram is geared up for its third season. The political crime drama is the most anticipated series to be streamed on MX Player. The series features Bobby Deol, Aaditi Pohankar, Chandan Roy Sanyal, and Darshan Kumar. The star cast welcomes actress Esha Gupta as a new character. Esha says she manifested for a role in Aashram.

Esha Gupta in Aashram Season 3: In the most loved series of Babaji (played by Bobby Deol), Esha Gupta will essay the role of an image-makeover specialist. With her tricks and charm, she will add gleam and conspiracy to the famous notorious Baba in season 3 of Aashram.

Esha commented on being roped in the series, “I think I manifested it unknowingly when I saw ‘Aashram’ during the lockdown and I wished to be a part of the show. Getting this series was more of a gift from the universe.”

Esha’s role is to promote Babaji, his acts, and his initiatives in the Aashram and enhance his reputation as a powerful Godman who works for the well-being of his people and society at large. The major question here is will she be able to manage to promote the teachings of Babaji and him as bhakt’s guru or she will trick him to expose his acts?

We discovered that Esha took teachings from one of her friends in order to prepare for the role. She worked a lot to understand the mindset and personality of the character. Bobby Deol returns as megalomaniac Baba Nirala and this time he wants to be known as Bhagwan Nirala. Aashram Season 3 is titled, ‘Ek Badnaam Aashram’ and will stream free exclusively on MX Player starting 3rd June produced and directed by Prakash Jha. Aashram’s story revolves around the Baba who wants to be powerful, exploits women indulging them in the drug trade, and controls the politics of the town. In the new season, his hunger for power has made him unstoppable. While, on the other hand, Pammi (played by Aaditi Pohankar) is determined to seek revenge from Bhagwaan Nirala.