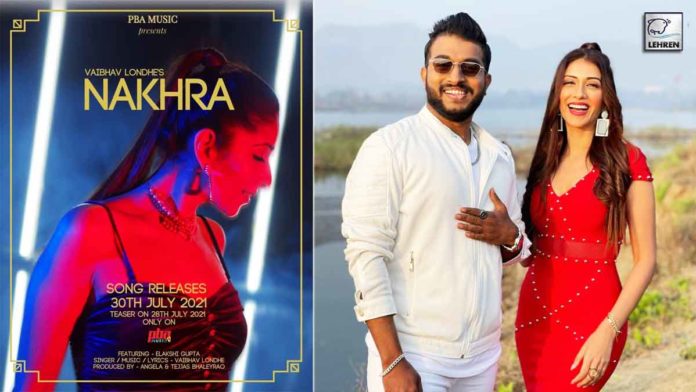 Elakshi Gupta is known for her dance moves, fashionable outfits, and amazing acting skills in the industry. Recently, the actress was seen in the hit party song ‘Nakhra’ released under the banner of PBA Music on their YouTube channel. Vaibhav Londhe, who is the first rapper in the Marathi Music Industry is the director, vocalist, and composer behind the hit song. Elakshi Gupta shared her views on working alongside Vaibhav Londhe and very talented director and producer of PBA Music Tejjas Bhaleyrao.

The ‘Tanhaji’ actress, while sharing her experience while working with the director, producer Tejjas Bhaleyrao said, “Tejjas Bhaleyrao Sir is an amazing person. He is friendly with the whole team and manages everything superbly. He was personally present on the set and made sure everyone is working with ease and happiness. He even used to give a tasty menu for all of us on the set.”

While sharing her opinions on Vaibhav Londhe who has sung, composed, and performed in the party anthem ‘Nakhra’, Elakshi Gupta says, “We did the entire shoot of the song in 2 nights schedule. Vaibhav Londhe and her stylist Rashmi were extremely sweet to me and treated me like their own. We shot this song in January at PBA Film City. It’s a beautiful place. We had bonfire and hot coffee breaks in between shoots. The dancers and the music of ‘Nakhra’ song created enthusiasm in all of us. Vaibhav Londhe is extremely sweet and down to earth. He is also very hardworking and a multi-tasker.” It is no surprise that Elakshi Gupta loved working with her fellow artists in the hit song and she seems to contented with the results.

On the work front, the actor will also be seen in her next Bollywood film “Luv You Shankar” and she has more projects to come which she will be announcing soon.