Dobaaraa BO Collection Day 1: Shows Get Cancelled Due To Lack Of Audience 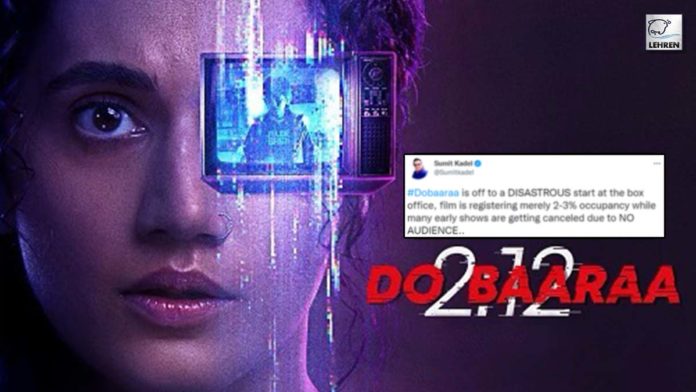 Take a look at film Dobaaraa's box office collection on day 1. Film shows get canceled after receiving a lack of audience in the theatres.

Dobaaraa: Taapsee Pannu and Anurag Kashyap’s much-anticipated film Dobaaraa finally hit the theatres on Janmashtami, 19, August. After much buzz, controversies, and boycott trends the film has now opened up to positive reviews from the netizens. Despite good reviews, many shows of the film were canceled on the very first day due to a lack of audience while the film barely managed to earn 60Lakhs on its opening day.

Anurag Kashyap’s directorial and Taapsee Pannu starrer film Dobaaraa is now in the theatres, after much buzz, the film opened up to pretty good reviews from the critics and the netizens as well. A segment of early watchers of the film Dobaaraa shared their reactions on Twitter and praised the film.

That’s not it, the theatre occupancy rate of the film is reported to have been 2-3% only as many shows were pulled off or canceled witnessing a lack of audience for the film. Mentioning the same, film trade analyst Sumit Kadel took to Twitter and wrote,  “#Dobaaraa is off to a DISASTROUS start at the box office, film is registering merely 2-3% occupancy while many early shows are getting canceled due to NO AUDIENCE..(sic),”

For the uninitiated, just days before the release the film became a target of the boycott trend aka the cancel culture. Opening up on the same Taapsee said, “If something like this (boycott trends) happens on a daily basis, one ceases to be bothered anymore. It becomes useless. There is a dialogue to this effect in one of my films”. Calling the trend a “joke” she said, “I cannot talk about others in the industry, but for me and Anurag, it has become a joke,” she added.

Dobaaraa is a time travel thriller with a unique concept directed by Anurag Kashyap with Taapsee Pannu in the lead. The duo collaborates for the third time after 2018 hit Manmarziyaa and the 2019 biographical drama Saand Ki Aankh. It is a unique story of time travel and has been screened at London Film Festival & Fantasia Film Festival 2022.  It is produced by Ekta Kapoor and Shobha Kapoor under Cult Movies which is a new wing of Balaji Telefilms. The movie arrived in theaters on 19th August 2022.