Dive Into The Fairytale Romance Of Neha Kakkar & Rohanpreet Singh 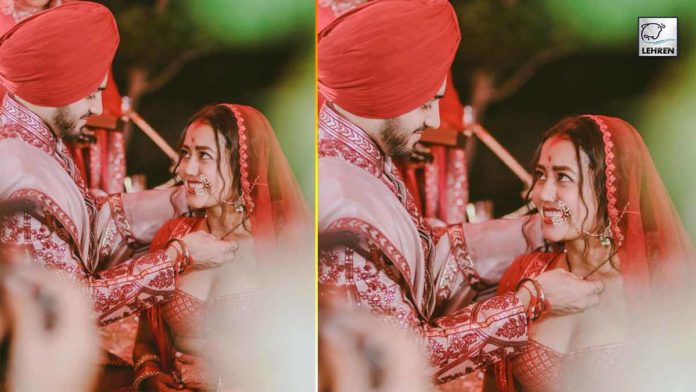 A couple of weeks back, Bollywood’s sensational singer Neha Kakkar tied the knot with beau Rohanpreet Singh. Taking to her Instagram handle, she shared a glimpse of her grand wedding ceremony. Fans were gushing seeing Neha’s PDA pictures all over social media. The couple indeed looks adorable together. The love story between the two is also very special. The fairytale romance of Neha Kakkar and Rohanpreet Singh actually does seem like a scene from the movie.

Both Neha and Rohanpreet are singers and that’s how their journey of fairytale romance began. The two collaborated on a song titled ‘Nehu Da Vyah’. Well, no one knew that the collaboration will turn out to be a beautiful moment for the two.

In a recent interaction with Anita Dongre, Rohanpreet spilled the beans on their love story. He revealed that they both literally met each other for the first time on the set for the song. Singh further adds, “Nehu Da Vyah and I didn’t even realise what she wrote for that song would come true one day. It literally changed my life for the best.”

Later on, Neha Kakkar also confessed about her first expression of her now-husband Rohanpreet Singh. She said, “My first impression of him was that he was so good to each and every person on the set. And undeniably, he was the cutest boy I had ever come across. The attraction was strong. I think it was really in those initial moments itself that I knew he was the one for me.”

Rohanpreet then went on to reveal how just a collaboration blossomed into a love story. He gushing confesses that it was love at first sight for him. Praising his lady love, Singh said that she is one of the most down to earth persons he has met.

Unveiling how he proposed to Neha, the 26-year old singer said, “One fine day, I mustered the courage to propose to her and she said yes! Shukar hai mere rabba. Really, thank you, God.”

For the unknown, Anita Dongre also happens to be the designer for Neha and Rohanpreet’s clothes for the fairytale wedding ceremony.

As of now, Neha and Rohanpreet are enjoying their honeymoon after a star-studded wedding.