Dinesh Vijan’s Next Starring Shahid Kapoor And Kriti Sanon Is A Robot Rom-Com Drama, Here’s What We Know 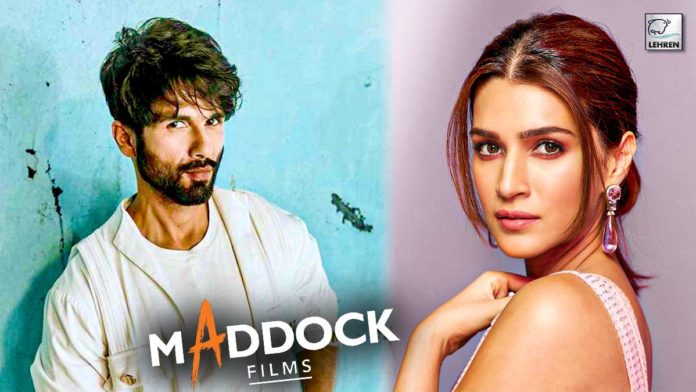 Shahid Kapoor is known for experimenting himself with varied characters. Popular as a heartthrob chocolate boy changed his identity by adopting the intense look of Haider to becoming a drug addict rockstar in Udta Punjab. Further, he acted as a macho crazy lover in Kabir Singh, then went on to be a cricketer in Jersey. And now we have a report that Shahid Kapoor may turn into a robot for Dinesh Vijan’s next film.

The Jab We Met actor has a Maddock Films project in his kitty. Kriti Sanon is starring opposite him in Dinesh Vijan’s upcoming film. Maddock Films is publicizing this movie as “a unique and the biggest love story coming out of the banner.” The unique love story is said to be a robot rom-com drama. Shahid Kapoor and Kriti Sanon’s next movie for Maddock Films is one of a kind of genre less explored in India

A source close to the development told, “Shahid Kapoor and Kriti Sanon’s film is a robot rom-com. It’s a quirky Indian take on the romance between a man and a machine, something that has been explored many times in Hollywood but is rare in Indian cinema. In this film, Shahid plays a robotics guy, while Kriti will be seen as a robot.”

The source further added more on Shahid Kapoor upcoming movie. “The Shahid-Kriti film is more like Ex Machina meets Bahu Hamari Rajnikant. It’s a Hollywood concept told in the typical Indian context and promises audiences a unique and enticing experience packed with loads of drama and quirkiness,” the source said.

Such a story of a relationship between humans and robots has been explored much in western cinema. There have been projects like ‘My Girlfriend Is An Alien, ‘My Robot Boyfriend’, ‘Are You Human’, and more. This Shahid and Kriti starrer will be one of a kind movie in Hindi cinema. Earlier, Aishwarya Rai Bachchan and Rajinikanth were roped in for a robot love story Tamil blockbuster, ‘Enthiran’ but that was more of a sci-fi film.

Apart from Dinesh Vijan’s next Shahid Kapoor has other projects too in his kitty. On the work front, the Kaminey actor will be seen in Ali Abbas Zafar’s next project titled Bloody Daddy. He will also headline the Amazon Prime series Farzi backed by Raj & DK.