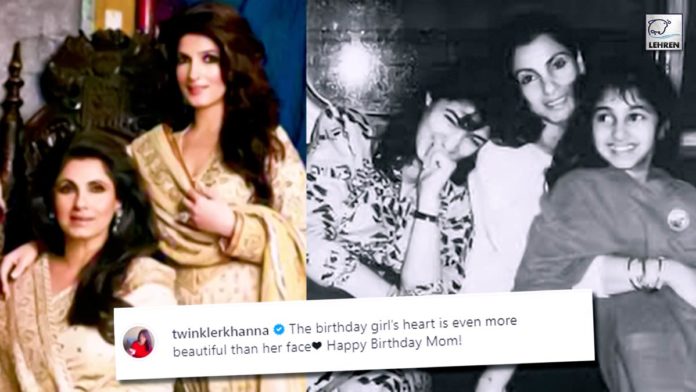 Bollywood actress Twinkle Khanna wishes her mother Dimple Kapadia on her 65th birthday with an emotional note and a throwback pic that will melt your heart.

Bollywood actress Dimple Kapadia turned 65 on Wednesday, the veteran actress got flooded with wishes from the industry celebrities and from her fans. While making her birthday even more special, her daughter and actress Twinkle Khanna penned down an emotional note with a throwback picture wishing her mother on her 65th birthday.

Bollywood actress Twinkle Khanna shared a throwback pic on Wednesday on her Instagram Wishing her mother, Dimple Kapadia on her 65th birthday, she wrote, “The birthday girl’s heart is even more beautiful than her face. Happy Birthday Mom.” In the picture, the retro actress could be seen with her daughters Twinkle Khanna and Rinke.

Reacting to the picture, Namrata Shirodkar said, “Happy happy birthday to the most beautiful woman I know.” Director Tahira Kashyap replied with a heart emoji. While on the other hand the fans also showered love to the mother-daughter duo, a user wrote, “
Indeed…..what’s inside shows outside…Wishing her the best of health and peace..always”, wishing the actress a user wrote, “Cant send blessings to her.Blessed r we who have wonderful momz.congrats to u n family for her special day”.

Well, it seems that Twinkle wasn’t the only one as Dimple Kapadia’s nephew, Karan Kapadia also shared a fun picture with the senior actress on his Instagram handle, along with a sweet birthday post. In the photo, Karan is seen giving Dimple a piggyback ride. He captioned the photo, ‘Happy Birthday Antoo, unlike this picture it’s actually you who picks me up in life. I love you’, followed by a red heart emoticon.

While recently, Twinkle Khanna shared a video of her mother and her daughter, Nitara Kumar walking with each other. As she wrote, “The two most important women in my life are walking together with an ease that I envy. With grandmothers and granddaughters, the generational gap is wide enough so that both can stretch out their arms without smacking the other in the face. Nanis are simply the best though, aren’t they?”

For the unversed, Bollywood actress Dimple Kapadia got married to actor Rajesh Khanna at the age of 15. Although the duo got separated just a few years after their marriage they never officially divorced. Soon the actress welcomed her firstborn Twinkle in 1974. In 1977, they welcomed their second daughter Rinke Khanna. While in the year 2012 the actress suffered family loss as her husband Rajesh Khanna died in 2012.

On the work front, Dimple Kapadia was last seen in the 2022 film A Thursday. Before that, she played an important role in the 2020 Christopher Nolan film Tenet. Meanwhile, Twinkle Khanna is known for her best-selling books such as Mrs Funnybones, Legend of Lakshmi Prasad and Pyjamas Are Forgiving.