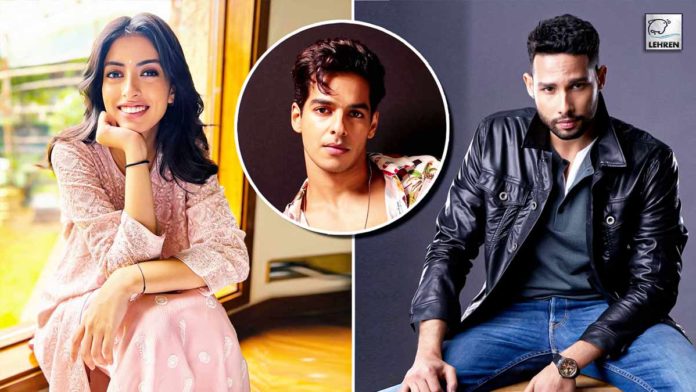 Ishaan Khatter teases Siddhant Chaturvedi for his rumored "love" relationship with Navya Naveli Nanda after he claims about being "single".

Koffee with Karan: Gehraiyaan actor Siddhant Chaturvedi recently appeared on Karan Johar’s very popular chat show, Koffee With Karan with his Phone Bhoot co-stars Katrina Kaif and Ishaan Khatter. During the fun episode, the actor was seen claiming that he is currently “single”, however, his co-star Ishaan Khatter and the show host Karan Johar seems to differ with his claim as the two were seen teasing the actor with his rumored girlfriend Navya Naveli Nanda’s name.

During the episode, Karan Johar asks the Gully Boy actor Siddhant Chaturvedi about his love interest and says, “Is there any love interest?” Reacting to this Siddhant says, “Right now my work is the…”. Reacting to Siddhant’s answer Ishaan jumps in his seat and says “don’t do that to him. Ask him Ananda’s question.” To this Karan asks Ishaan “Ask Ananda question. What is Ananda?”.

Without a delay, Siddhant changes the topic and claims that he’s single right now, he says, “no no I am so single, that roaming around with me, he (Ishaan) has become single.” However, Karan says that he’s not very satisfied with his answer but will take his word for now. While after in the rapid-fire segment of the show, Ishaan again brings out Siddhant’s “single” status and suggests that he was lying about his relationship status before.

Ishaan Khatter Gets Candid About His Break Up With Ananya Panday

During the episode, Karan asked Ishaan, “You broke up with Ananya?”, to this Ishaan said, “Did I? Because you said she broke up with me recently.”

Ishaan was further asked about his current relationship status with Ananya after their breakup and if he still wants to remain friends with her, to this Ishaan said, “Yeah, I mean, I would hope to have her as a friend for the rest of my life. She is one of the most wonderful people I have known. She is a sweetheart, she really is. Anyone who has met her would say this. She genuinely is a sweetheart. And all pulpy questions aside, she is someone who is very dear to me and will always remain so.”

Meanwhile, it’s not the first time that Siddhant Chaturvedi has been linked with Amitabh Bachchan’s granddaughter Navya Naveli Nanda, as earlier the two were spotted together at Karan Johar’s birthday bash. However, the duo refrained from making any public appearances together or never made any mention of each other in public.

ALSO READ: Ishaan Khatter Confirms His Break Up With Ananya Panday On KWK, Says This