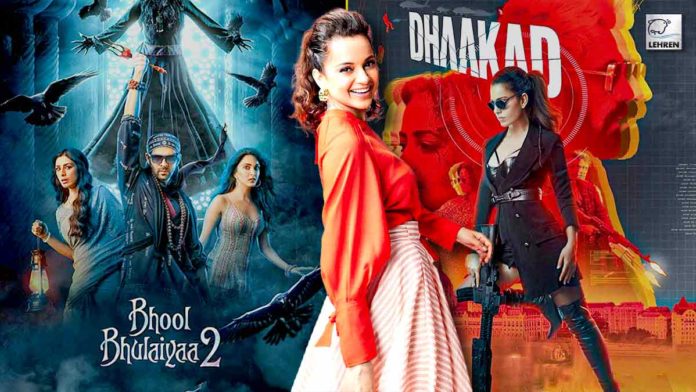 Dhaakad Box Office Day 3: Kangana Ranaut’s film Dhaakad has been facing quite a tough time keeping up with Kartik Aaryan’s Bhool Bhulaiyaa 2. The film has been striving hard to keep up at the box office as many single screens and multiplexes replace the film with Bhool Bhulaiyaa. Netizens trolls Kangana as the film enters the list of her back-to-back flops.

Kangana Ranaut’s newly released film “Dhaakad” is facing a tough time on the big screens with almost zero audiences at many theatres while on the other hand, Kartik Aaryan’s film Bhool Bhulaiyaa 2 has been receiving. Even during the weekend, the film showed no signs of improvement as the film couldn’t find any takers. The film has fallen on its face, till now it managed to earn merely Rs 1.50 crore gross at the box office. While many theatres opted to remove the film due to no audience on both single screens and multiplexes and replaced it with Bhool Bhulaiyaa 2. Even after the advance bookings, the film has not received enough audience.

Dhaakad was released on 2100 screens across the country. Now the film has been reduced by 250-300 screens. On Monday, the number of screens will be reduced further. Kangana’s film has turned out to be a huge flop as the film has been added to her back-to-back flops. Reacting to this netizens took over the social media and posted memes referring to the major flop. Check out-

On the other hand, Kartik Aaryan’s Bhool Bhulaiyaa 2 has been doing exceptional business with Housefull during the weekend. According to the early estimates, the film collected Rs 22 crore on Sunday, May 22 taking the net total to Rs 53.50 crore.