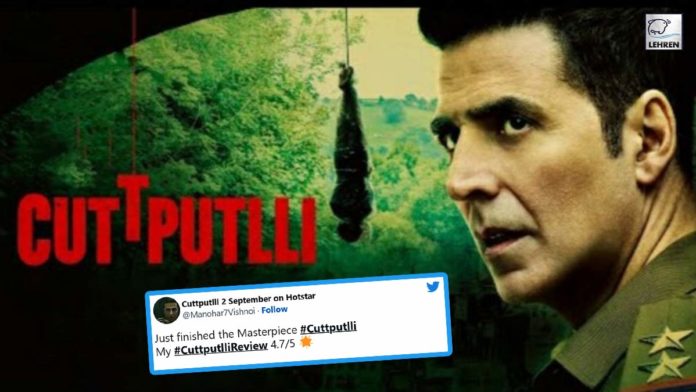 Here's how the netizens have reacted to Akshay Kumar starrer film Cuttputlli, take a look-

Cuttputlli Twitter Review: Bollywood actor Akshay Kumar’s film CuttPutlli is now out on Disney+Hotstar. The film has apparently opened up to good reviews, while now the netizens have also shared their reaction on Twitter, check out netizens’ reviews and reactions to the film-

Akshay Kumar and Rakulpreet starrer Cuttputlli is now out on the OTT platform Disney+Hotstar. The Cop thriller film is directed by Ranjit M Tewari the film stars Rakul Preet Singh, Sargun Mehta, and Chandrachur Singh along with Akshay Kumar.

In the recently released cop thriller, the Bollywood actor Akshay Kumar is seen essaying the role of a dedicated sub-inspector, Arjan Sethi who took an oath to keep his city(Kasauli) safe from crime. However, destiny has some different plans for Arjan as he encounters various murder cases where the culprit leaves no traces behind, except for a body.

Meanwhile now the early watchers and fans of the actor have turned in their reviews for the film on Twitter. Hailing Akshay’s performance in the film a user wrote, “#Cuttputlli is a fine fine fine movie. Just completed it !! Akshay Kumar is a gem of an actor. He can be so effortlessly efficient that you can only imagine of an actor PS: It’s certainly better than the original and I loved the original”, calling the film a “masterpiece” another user tweeted, “Just finished the Masterpiece #Cuttputlli My #CuttputlliReview 4.7/5 (0.3 point lass because of chandrachur singh parformance & Song )”.

Check Out Netizens’ Reaction And Review On Cuttputlli-

Directed by Ranjit M Tewari the film stars Rakul Preet Singh, Sargun Mehta, and Chandrachur Singh along with Akshay Kumar. It is produced by Vashu Bhagnani, Jackky Bhagnani, and Deepshikha Deshmukh under the banners of Pooja Entertainment Productions. The film is now streaming on Disney+ Hotstar.